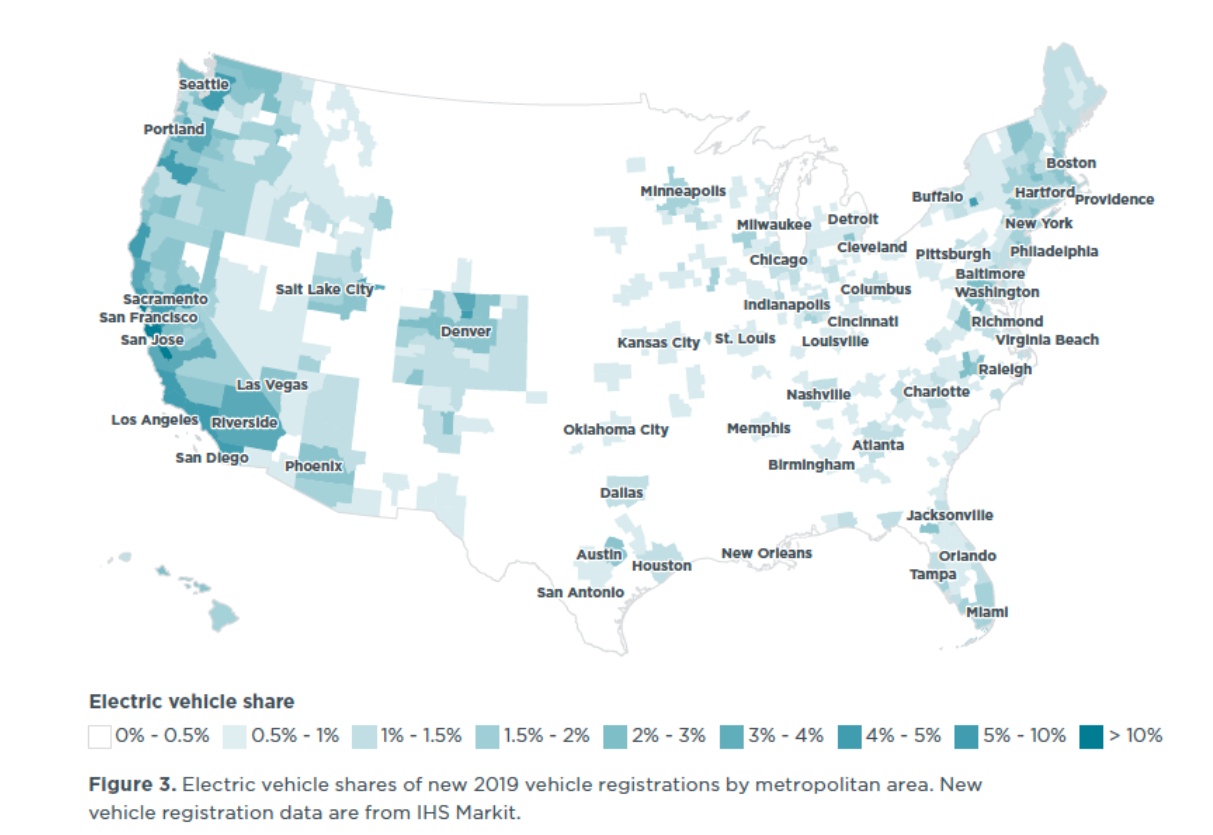 New research from the International Council on Clean Transportation (ICCT) found that EV uptake varied widely across metro areas throughout the United States in 2019. While the national EV uptake rate was two percent of new light-duty vehicle sales, rates were as high as seven percent on the West Coast. The U.S. EV market was heavily concentrated in the 50 largest metro areas in the country. These metros claimed more than 80 percent of all EV sales in 2019 despite making up only 55 percent of the national population. EV uptake as a proportion of new vehicle sales in these metros was 2.7 percent compared to one percent for the rest of the country. Los Angeles, San Francisco, San Jose and New York City were the largest metro markets in terms of total EV registrations.

San Jose, California led the nation with EVs accounting for 20 percent of new light-duty vehicle sales in 2020, a rate ten times the national rate. San Jose was also the city with the highest EV charging deployment with more than 1,400 public charging stations per million people, well above the national average of 225 charging stations per million people. ICCT found that half of the U.S. population lives in areas with charging station density less than 155 stations per million. Overall, the report found that EV charging deployment grew in line with increasing EV sales across the country. Through August 2020, more than 92,000 charging points were deployed throughout the country and a third were located in California. The ICCT found that charging deployment in the 5 largest metro areas is growing at about 30 percent every year and is on track to provide sufficient charging for projected EV adoption in 2025.

The ICCT report points to high levels of EV model availability and policy support as two of the key factors influencing EV growth in select metro markets. The top ten metro areas for EV uptake all had state-level EV rebates and states and cities with policy packages supporting multiple interventions tended to have the highest EV uptake.

This is certainly the case in the ZEV states, which account for most of the leading metro EV markets from the ICCT report and continue to dominate the U.S. EV market through June 2020. In the first half of the year, data on EV Hub reveals the 12 ZEV states accounted for 60 percent of the country’s EV sales. These same states make up only 31 percent of the population. The California Air Resources Board estimates that the impact of the ZEV Program would lead EVs to account for at least eight percent of the state’s new vehicle sales by 2025. The Golden State is close to hitting the mark five years early with EVs claiming 7.4 percent of the state’s total light-duty vehicle sales between January 2019 and June 2020.

Model availability continues to be a limiting factor for many markets in the country. The report highlights an EV desert in some of the more rural states and regions throughout the country where more than half of the country’s population live in areas with fewer than 12 EVs for sale. The top five metro area markets all had more than 25 EV models available for purchase, a level ICCT considers critical for encouraging sales. Fortunately, the trends are heading in the right direction nationwide with 14 more EV models available through August 2020 than there were a year ago. This brings the national total to 52 EVs available across the country and there are now 31 states with at least 25 models available for purchase. In July 2019, there were only 12 states meeting this threshold. More than 30 new models are expected in 2021 and our new Automakers dashboard that will be published soon will allow you to track these market developments over time.