A Bright Future: Reflecting on a Decade of EVs

The first mass-market plug-in electric vehicle hit U.S. streets in late 2010, about a year after I landed in DC. By the end of this year, millions will have been sold worldwide and nearly $350 billion will have been committed to electrify the transportation sector. Looking back, it’s evident that the rollout of EVs has managed to both disappoint early advocates and far exceed the expectations of experts. The next decade will be pivotal for the technology as cost parity is reached and, hopefully, global efforts to reduce greenhouse gas emissions are finally accelerated.

A precipitous fall in battery prices in the 2010s completely changed recent and future investments in transportation electrification. A firm that tracks this information closely, Bloomberg New Energy Finance reports that price declines continued in 2019, reaching $156 per kilowatt-hour and predicts that prices will reach just $100 per kilowatt-hour by 2023. Inexpensive batteries opened up a world of opportunities for transportation electrification, shifting investment largely to all-electric vehicles from plug-in hybrids. They’ve also significantly expanded the tent to include transit and school buses, short-haul delivery vans and trucks, and the largest vehicles of them all, Class 8 trucks. Infrastructure went from, “all you need is an outlet in your garage” to massive, multi-megawatt charging sites. The decade didn’t start out that way and a look back offers some clues as to what to expect in the 2020s. 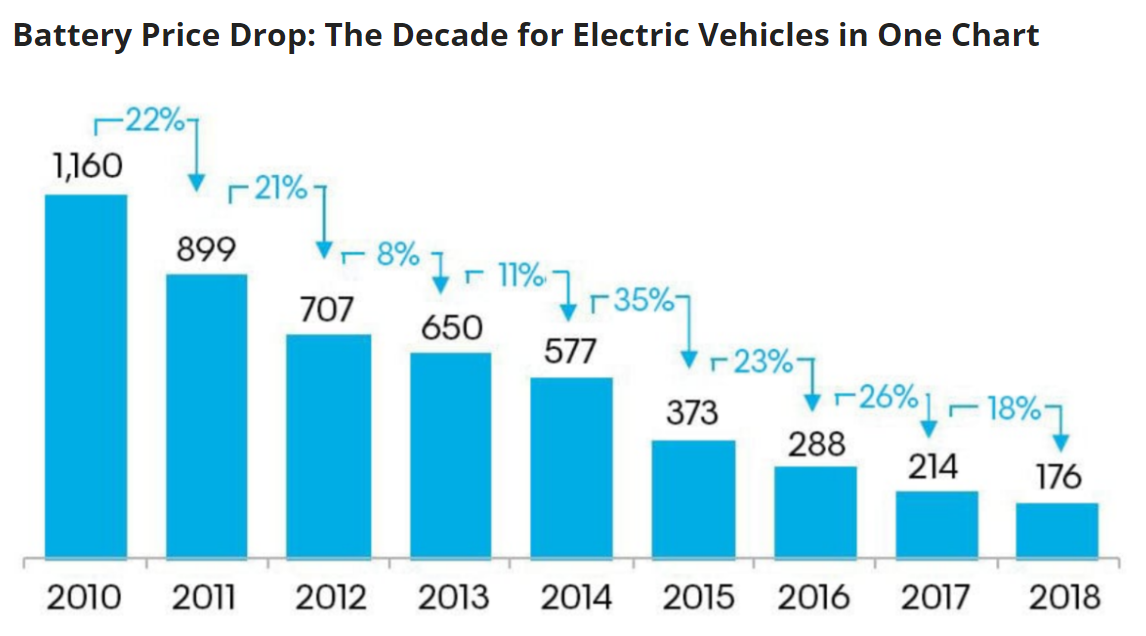 Lofty ambitions and high hopes marked the beginning of the decade as General Motors, Nissan, and a few hot-shot startups started to roll out the first mass market EVs. Analysts were clear: lithium ion batteries were expensive and would stay that way, so it was impractical to build an all-electric vehicle with a range of more than 100 miles. Besides, they said, most Americans drive fewer than 50 miles per day and that range is perfectly adequate for a “commuter car.” To be clear, both the Nissan Leaf and Chevy Volt were remarkable feats of engineering; the former being the first mass-marketed all-electric vehicle and the latter, a complex hybrid drivetrain so original that GM made up a new name for it (an extended range electric vehicle). All the while, a small Silicon Valley startup threw caution to the wind and toiled away with mass-produced lithium cells instead of those specifically designed for vehicles, first putting them into the seriously expensive Lotus Elise chassis and calling it the Tesla Roadster.

Fast forward five years, the United States failed to reach its goal of one million EVs on the road by the end of 2015, oil prices plummeted by more than half, and a number of companies hoping to capitalize on the new market reminded everyone why it’s so hard to mass produce an automobile. Naysayers predicted dire forecasts with EVs making up only one percent of all auto sales by 2040. Unattractive offerings from automakers plagued the market in the mid-2010s from short range plug-in hybrids with a battery stuffed in the trunk to tiny all-electric cars with meager abilities. The EV industry looked like it was in trouble – sales were down five percent from 2014 to 2015. Alas, all was not lost.

Tesla continued its slow march, delivering the first Model S in late 2012, going public in 2013, and continuing to shun the experts who said that long range all-electric vehicles were impractical. The market rewarded them handsomely, shooting their valuation to over $30 billion by 2014. By late the next year, they worked out the kinks in their manufacturing processes, delivered their 50,000th EV, and built out a national network of “superchargers” to quell any concerns over range anxiety. At this point, cumulative sales of all-electric vehicles caught up to plug-in hybrids and never looked back.

The Tesla playbook was examined closely by the other automakers resulting in major investments in long-range all-electric vehicles in the latter half of the decade. What Tesla may be remembered for above all else is their success at rapidly accelerating the timeline for investments in batteries and related technology. On EV Hub, we’ve tallied nearly $350 billion in announced investments mostly by American, German, and Chinese vehicle manufacturers.

The rollout of this new generation of vehicles is going slowly and it remains unclear if these vehicles will be able to compete with Tesla for the small EV market (less than 2 percent of U.S. auto sales) or if they will grow the pie and increase EV market share. Indeed, EV sales in the United States this year will be down from 2018 levels and sales for 2020 are unlikely to rebound fully. Ultimately, success for this next generation EV in the marketplace will come down to the attractiveness of the vehicles to customers, the ability to charge conveniently, the profitability of the vehicles to manufacturers, and the willingness of dealers to sell them (or a wholesale change in how passenger vehicles are bought). Policymakers in Washington have a chance at a big win for the EV market by reforming the federal EV tax credit this month.

As the industry acknowledged that all-electric vehicles, which made up 70 percent of sales over the last two years, are the present and the future of transportation electrification, eyes turned towards the dearth of charging infrastructure in the second half of the decade. Charging service providers have deployed thousands of charging stations over the last 10 years, largely through the support of publicly funded programs. Efforts to expand infrastructure were buoyed in 2016 by the Volkswagen emissions scandal, which pumped over $2 billion into infrastructure through Electrify America (a Volkswagen subsidiary) and hundreds of millions into transportation electrification through a state-controlled trust. The business model for EV charging has and will remain tough without electricity regulatory reform and if revenue sources are limited to just the transportation service, especially when vehicles at a charging site could expect to charge at upwards of 350 kilowatts.

The electric utility emerged in the mid-2010s as an essential partner to charging service providers to advance transportation electrification and capture some of the value these vehicles can offer to the grid. State regulatory commissions have approved more than $1.3 billion in programs for investor-owned utilities to advance EVs. From covering the costs of installing charging stations to smart charging programs to rebates for vehicles, utilities around the country are playing a variety of roles and are certain to deepen their involvement in transportation in the coming years.

The 2010s saw the rise of the passenger electric vehicle and the emergence of a worldwide movement to #electrifyeverything in transportation. The 2020s could be the last decade where the internal combustion engine vehicle is the undisputed market leader for all vehicle classes. Policymakers looking to keep the United States globally competitive in the next decade should turn their eyes towards transportation electrification. EVs of all shapes and sizes are the next big prize to be won on the global stage.