Electric Buses are a Boon for Renewable Energy, and Portland is the First City to Capitalize

TriMet in Portland rolled out the nation’s first wind-powered transit bus in April. Working with Portland General Electric (PGE), the transit agency will pay $228 per month for bundled renewable energy credits to ensure that the buses run on clean energy. This allows TriMet to take advantage of PGE’s Clean Wind program, which supports existing wind power and investment in new capacity. Buy-in from large agencies like TriMet is essential to the success of PGE’s renewable energy program and will help expand the program to further reduce emissions across the grid. The wind-powered buses are the first in a plan to spend $53 million for 80 electric buses over the next five years.

Portland already has cleaner electricity than the national average. According to a 2018 study from the UCS, passenger EV emissions in Oregon are comparable to a gasoline-powered vehicle with a fuel economy of 96 mpg. TriMet buses running on wind power are even cleaner than other electric buses in the region. While TriMet’s buses will still be charging from the grid, this partnership provides a steady demand for PGE’s off-peak renewable energy generation that can improve grid operation and to reduce the carbon intensity of the grid for all users. This action is in support of Portland’s Climate Action Plan and statewide programs like Keep Oregon Moving, which seek an 80 percent reduction in carbon emissions by 2050

Electric utility engagement is key to the success of public programs. Our Electric Utility Filing Dashboard tracks this engagement and allows you to break down the details of these utility programs. For their part, PGE has already been approved to invest more than $4.8 million in transportation electrification and is awaiting approval for an additional $5.4 million. Roughly 25 percent of these funds specifically target mass transit.

PGE Investment In Transportation Electrification Through May 2019

This table shows the total amount of investment in transportation electrification proposed by PGE through 2019. More than half of the total $10.4 million of proposed investment is still pending approval.

Cities like Portland are not alone in efforts to harmonize public policy, public funding, utility programs, and transit agency planning to maximize the benefits of electrified transportation. Hawaii has dedicated almost 85 percent of their total VW settlement funds to electric buses. Honolulu and other cities across the state are working closely Hawaiian Electric to accelerate the transition to 100 percent clean energy and transportation. To create a more favorable environment for electric buses, the commission approved the utility’s program offering reduced rates for off-peak transit bus charging in March.

New York City has taken a similar approach to achieving goals of total bus fleet electrification by 2040. ConEd offers reduced rates for bus charging and has invested more than $12 million to add to significant public charging. This complements public programs like NYSERDA’s Charge Ready NY that offers rebates for charging stations and statewide renewable energy and transportation electrification goals encapsulated in the state’s energy strategy, referred to as Reforming the Energy Vision.

For these cities and states, transit bus electrification is about more than just saving money on fuel and providing smoother rides. These partnerships serve as examples local solutions to climate change that reduce emissions and prioritize the public health needs of their communities. However, there is more cities could be doing to take advantage of the nexus between clean transportation and renewable energy.

There is a greater potential to strengthen the complementary relationship between EVs and renewable energy using federal funds. The latest round of the Federal Low or No (Low-No) Emissions Vehicle Program closed on May 14, setting up cities across the country to receive an additional infusion of $85 million in 2019 for the purchase of electric buses. According to our Public Funding Awards Dashboard, only six states that have received Low-No funding to date specify that some of their buses will be charged with renewable energy. These programs are worth roughly $10 million together—less than five percent of the total funding.

With more than $560 million in approved investments across five states, including some focus on mass transit, electric utilities can help fill this gap. By investing in public charging stations and providing rate promotions for EVs, utilities can expand the demand for off-peak power. Daytime charging can capture excess renewable energy generated during off-peak hours that would otherwise be thrown away. Utility savings through load balancing and increased revenue with an expanding EV fleet can generate savings for all ratepayers.

Overall, the U.S. electric bus market is well-positioned to increase the demand for renewable energy generation. More than $350 million in public funding has been invested in electric transit buses across 43 states from 2011 through 2019. These programs have facilitated the purchase of more than 380 electric transit buses since 2011. However, not all of the awardees specify the number of buses they plan to purchase with the grants. CALSTART fills in for unreported commitments, estimating 1,650 electric and fuel cell transit buses in operation or soon to be deployed through 2018. Despite increasing investment, electric transit buses comprised less than one percent of the national fleet at the end of 2017, the last year for which data is available.

Funding Awards for Electric Transit Buses as of May 2019

Efforts to go electric are increasingly important at a time when global atmospheric carbon emissions reach levels not seen in three million years. At the same time, there is a greater potential to strengthen the co-benefits of EVs and renewable energy, while filling other gaps to ensure that transit buses meet the operational needs of cities.

You can learn more about Portland’s electric buses at this year’s Roadmap Conference hosted by Forth in Portland from June 18th to 19th. Use our dashboards to track progress on these issues and investment in transit bus electrification. Use the following resources to further explore the details of existing programs and data highlighted in this story. 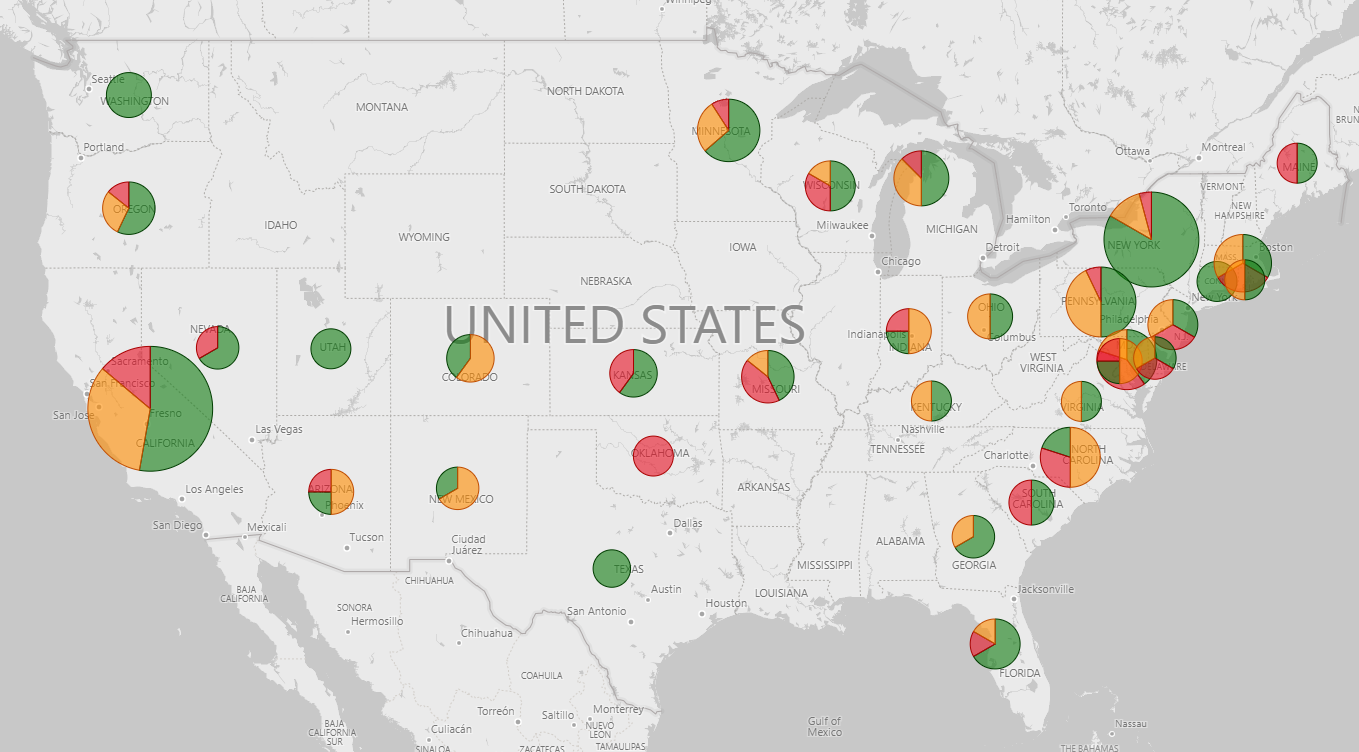 [is logout]You must be logged in to view this content.[/is]

CALSTART Report on Zero Emission Buses
Zeroing in on ZEBS: State of the US Zero Emission Bus Industry
By Elliott Popel, Project Manager at CALSTART
Next generation clean technology buses are seeing healthy early-adoption rates across the nation in cities and towns of all shapes and sizes according to new data from CALSTART. Breathing Eas…
Federal Transit Administration Low or No Emission Vehicle Program
Provides funding through a competitive process to states and transit agencies to purchase or lease low or no emission transit buses and related equipment, or to lease, construct, or rehabilitate facilities to support low or no emission transit buses. The program provides funding to support the wider…
New Data Show Electric Vehicles Continue to Get Cleaner
New data from the US EPA on power plant greenhouse gas emissions are in, and electric vehicles (EV) in the US are even cleaner than they were before. The climate change emissions created by driving on electricity depend on where you live, but on average, an EV driving on electricity in the U.S. toda
Bloomberg New Energy Finance Report on Electric Buses in Cities
Key findings in the report, Electric Buses in Cities: Driving Towards Cleaner Air and Lower CO2, highlight e-buses’ competitiveness with conventional diesel and CNG fueled buses. Learn more.