This data story seeks to put the unprecedented scale of these federal EV investments in historical context. The federal government has been investing in the research and development, manufacturing, and deployment of EVs since as early as 2008. Atlas reviewed publicly available program documents and funding announcements to see what can be learned about federal investments in EVs to date, and what it means for the implementation of IIJA and IRA.

In total, Atlas tracked $3.3 billion awarded by the United Sates government for EVs across 16 programs prior to IIJA and IRA. The American Recovery and Reinvestment Act of 2009 (ARRA) accounts for more than half of that investment: more than $1.6 billion was awarded through a) the Electric Drive Vehicle Battery and Component Manufacturing Initiative, which supported the construction of U.S.-based manufacturing plants for batteries and electric drive components, and b) the Transportation Electrification initiative, which provided grants for vehicles and charging stations. Nearly 80 percent of this 2009 ARRA funding went toward supporting manufacturing or research and development, compared to only 20 percent that supported deployment of EVs or chargers. Since then, federal funding has shifted towards deployment, primarily through grants for electric transit buses from the Federal Transit Administration. Figure 1 shows federal funding for EVs annually, and shows this trend away from funding for manufacturing and toward funding for EV and charger deployment.

Figure 1: United States Federal Funding Awarded for EVs prior to IIJA and IRA by Funding Type and Award Year 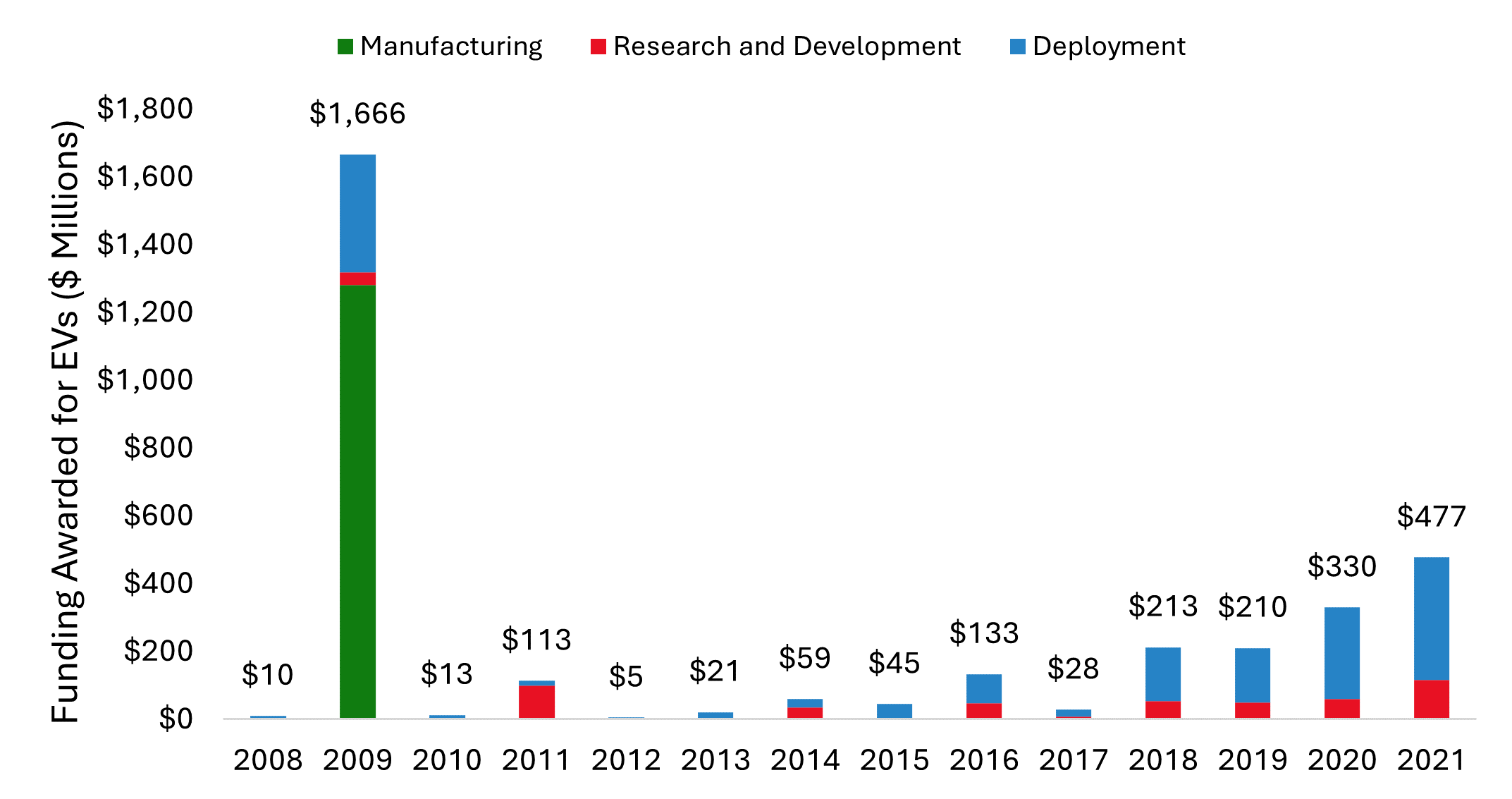 Most federal funding for EVs has come from programs that are primarily dedicated to transportation electrification. However, there are a number of broader transportation infrastructure programs that fund EVs as well as vehicles of other fuel types. Historically, only a small portion of funding awarded under these programs has gone towards EVs, and overall, only 20 percent of all federal funding for which EVs were eligible went to EVs. Table 1 lists federal programs that could fund EVs and shows the percent of funding that went to EVs. Each of these programs is discussed in depth below.

In total, the $100 billion for which EVs are eligible in IIJA and IRA represents nearly 30 times the total EV funding awarded by the U.S. government to date.

Table 1: U.S. Federal Programs for Which EVs And EV Infrastructure Have Been Eligible Prior to IIJA and IRA

The federal government passed the $787 billion American Recovery and Reinvestment Act (ARRA) in response to the Great Recession in 2009. The act invested broadly in infrastructure, housing, education, and research and development. Atlas specifically analyzed $2.5 billion administered through the Vehicles Technology Office across four programs:

Awards made under ARRA’s Transportation Electrification program helped pave the way for transportation electrification. Grants to ECOtality (now Blink) and Coulomb Technologies (now ChargePoint) helped develop a nationwide network of more than 14,000 Level 2 and 300 DC fast chargers in conjunction with the deployment of 2,600 Chevrolet Volts and 5,700 Nissan Leafs.4 Today, ChargePoint and Blink account for nearly half of the publicly accessible Level 2 charging ports in the U.S. and nearly 2,000 DC fast charging ports. Chevrolet’s plug-in hybrid Volt and Nissan’s fully electric Leaf are the two best-selling non-Tesla EVs of all time with 330,000 units sold to date.

Low or No Emission Vehicle Program

The Federal Transit Administration (FTA)’s Low or No Emissions Vehicle Program (‘Low No’) has awarded $610 million to date for electric buses, representing 92 percent of the total awards made under the program. Low No has funded electric buses in 47 out of 50 states, enabling transit electrification even in states without local policy support for electric vehicles. In Mississippi for example, a Low No grant to Coast Transit Authority for the purchase of electric transit buses represents the only public funding for electric vehicles in the state to date. While California, a state that has historically been a leader in EV investment, has received the most funding, states that are less supportive of EVs such as Texas, Kentucky, and South Carolina, are also well represented with $66 million in funding awards between them (Figure 2).

Figure 2: Funding Awarded for Electric Transit Buses under the ‘Low No’ Program by State 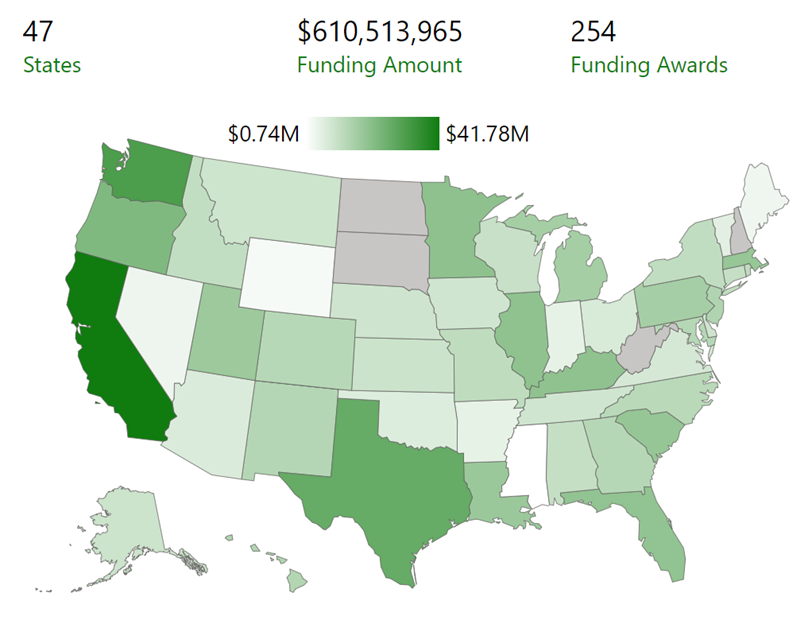 IIJA increases Low No funding by nearly ten times, with $5.5 billion available from FY 2022 to FY 2026. IIJA also adds two new requirements. First, a minimum of 25 percent of Low No funding must go towards non-zero emission vehicles. To date, only eight percent of awards have gone to non-zero emission vehicles, so IIJA will provide a significant boost to other qualified low emission buses like those fueled by natural gas. In addition, transit agencies applying for a zero-emissions project must submit a zero-emission transition plan and spend at least five percent of their award on workforce development and training.

On August 16, 2022, the FTA announced the Fiscal Year 2022 Low No awards. More than $830 million was awarded for electric buses, representing 75 percent of total funds awarded.

The Buses and Bus Facilities program compliments the ‘Low No’ program by funding the construction and rehabilitation of transit bus facilities. To date, 12 percent of funding awarded under this program has gone towards preparing or constructing facilities to house electric buses. However, this portion is on the rise, with electric projects representing 30 percent of awards in FY 2021. Figure 4 shows the rise of electric Buses and Bus Facilities funding over time. 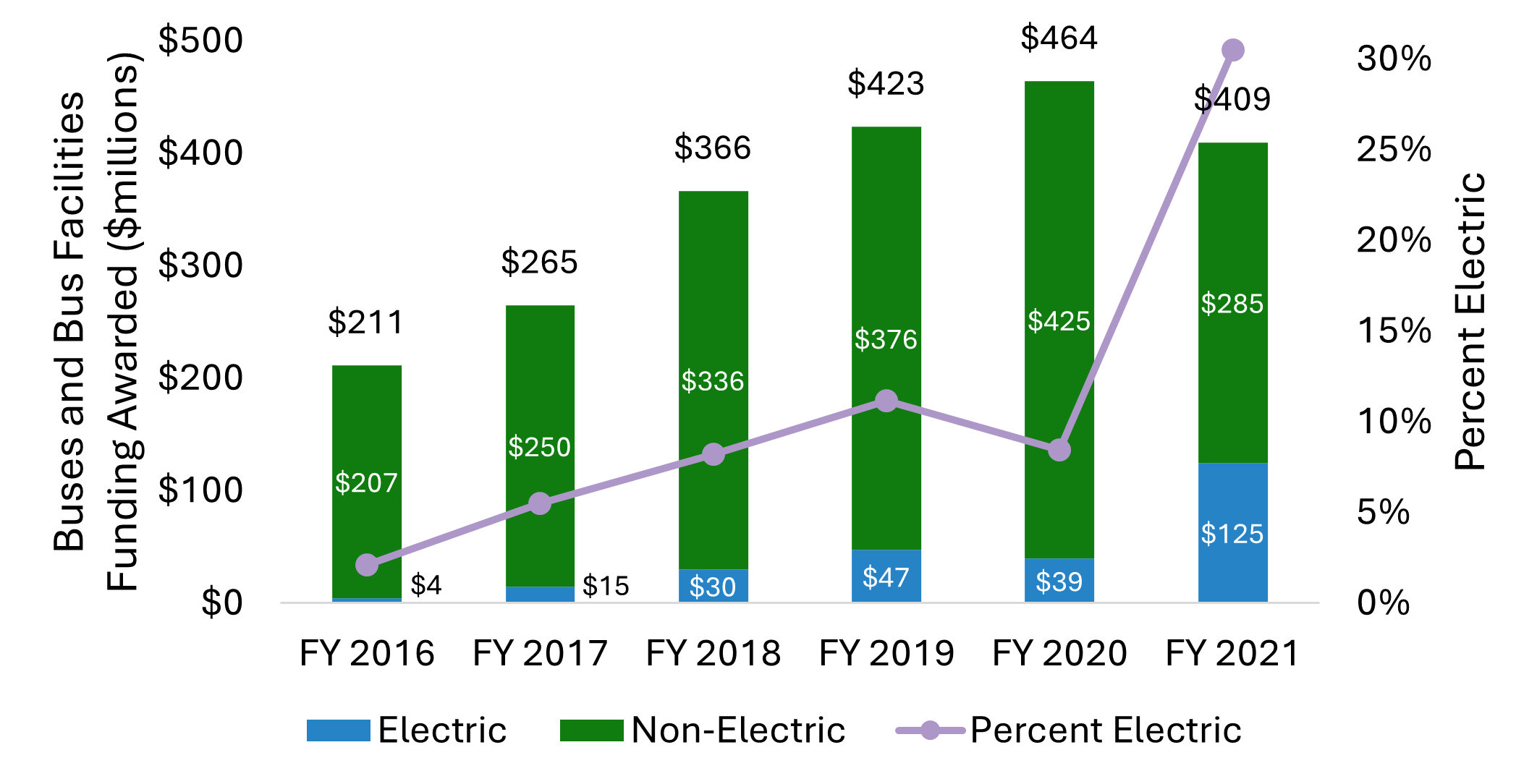 IIJA includes $2 billion for competitive grants and $3.2 billion for formula grants under the Buses and Bus Facilities program. Like the Low No program, transit agencies applying for a zero-emissions project must submit a zero-emission transition plan and spend at least five percent of their award on workforce development and training.

Through a suite of eight distinct programs, the U.S. Department of Energy’s Vehicles Technology Office (VTO) has awarded more than $500 million for the research and development of EV technologies such as battery materials, electric powertrains, and charging stations. Funding for EVs represents nearly half of all funding awarded by VTO to date.  This funding amount does not include the ARRA funding administered by VTO and discussed in the ARRA section.

Research into cheaper and more efficient battery technology has led the way, accounting for 35 percent of electric awards. Batteries are followed by research and development of charging stations and electric medium- and heavy-duty (MDHD) vehicles each at 20 percent. Figure 4 shows the breakdown of VTO funding by project type. 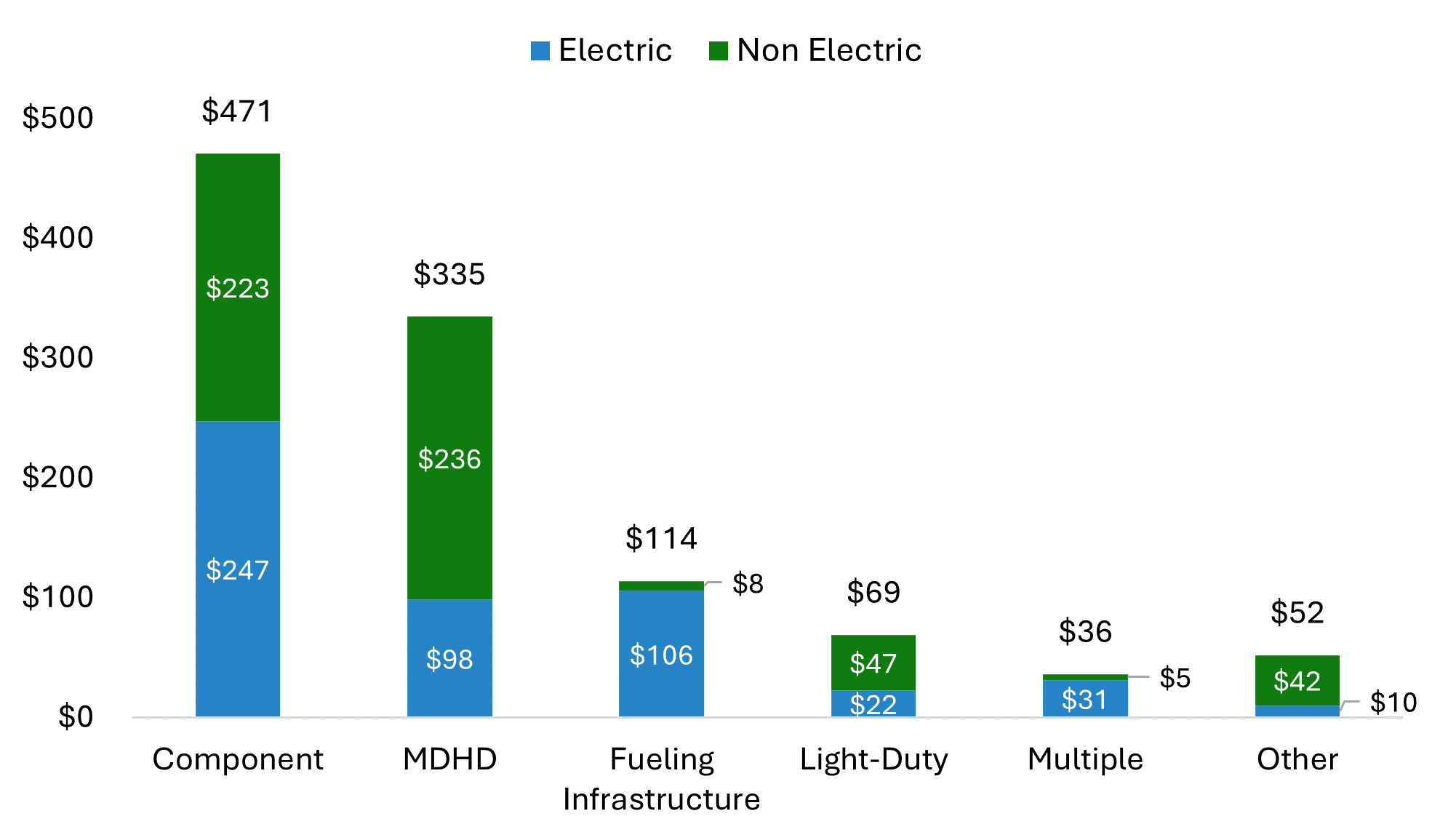 CMAQ received an additional $13.2 billion in IIJA, and the act explicitly adds “the purchase of  medium- or heavy-duty zero emission vehicles and related charging equipment” as an eligible project. Previously, these projects were only eligible if they fit within the category of fuel reduction projects, or as part of a public transit project.

It remains to be seen whether these changes will result in a greater portion of new CMAQ funding going toward electric vehicles.

DERA has awarded $76 million for EVs, representing 10 percent of all national DERA funding to date. DERA has funded a wide variety of MDHD EVs lead by school buses, locomotive switchers, and yard tractors. DERA has been appropriated $100 million per year since 2012 and current funding runs through 2024.

The RAISE program (formerly BUILD, and before that, TIGER) offers discretionary grants for surface transportation projects with a significant local or regional impact. RAISE does not primarily fund vehicle electrification, but it may as part of a larger project. For example, in FY 2021, Rockford, Illinois implemented an electric bus circulator route as part of a street reconstruction project and Derby, Connecticut constructed a multimodal transportation center with new electric buses.

To date, just one percent of RAISE funding has gone towards transportation electrification projects. IIJA makes $7.5 billion available for RAISE from FY 2022 to FY 2026 and puts additional emphasis on climate outcomes. On August 11, 2022, the Department of Transportation announced the FY 2022 RAISE awards. Out of 166 projects projects funded in FY 2022, 17 include funding for EVs or EV charging.

The nearly $100 billion of funding eligible to support EV adoption in IIJA and IRA significantly outsizes the $3.3 billion of federal investment in EVs made prior to their passage. The impact of this new funding for electrification paired with continued support from states, utilities, and the private sector will be transformative. Atlas looks forward to tracking this federal funding and analyzing its impact over the next several years.

Explore the data for yourself and keep track of funding awarded through IIJA and IRA on the Public Funding Page of the State Policy Dashboard.

[1] This data story does not cover loan programs or tax credits.

[2] In this data story, ‘EVs’ includes fully battery-electric vehicles, as well as plug-in hybrid vehicles. It does not include fuel cell vehicles.

This data story was supported by the Natural Resources Defense Council 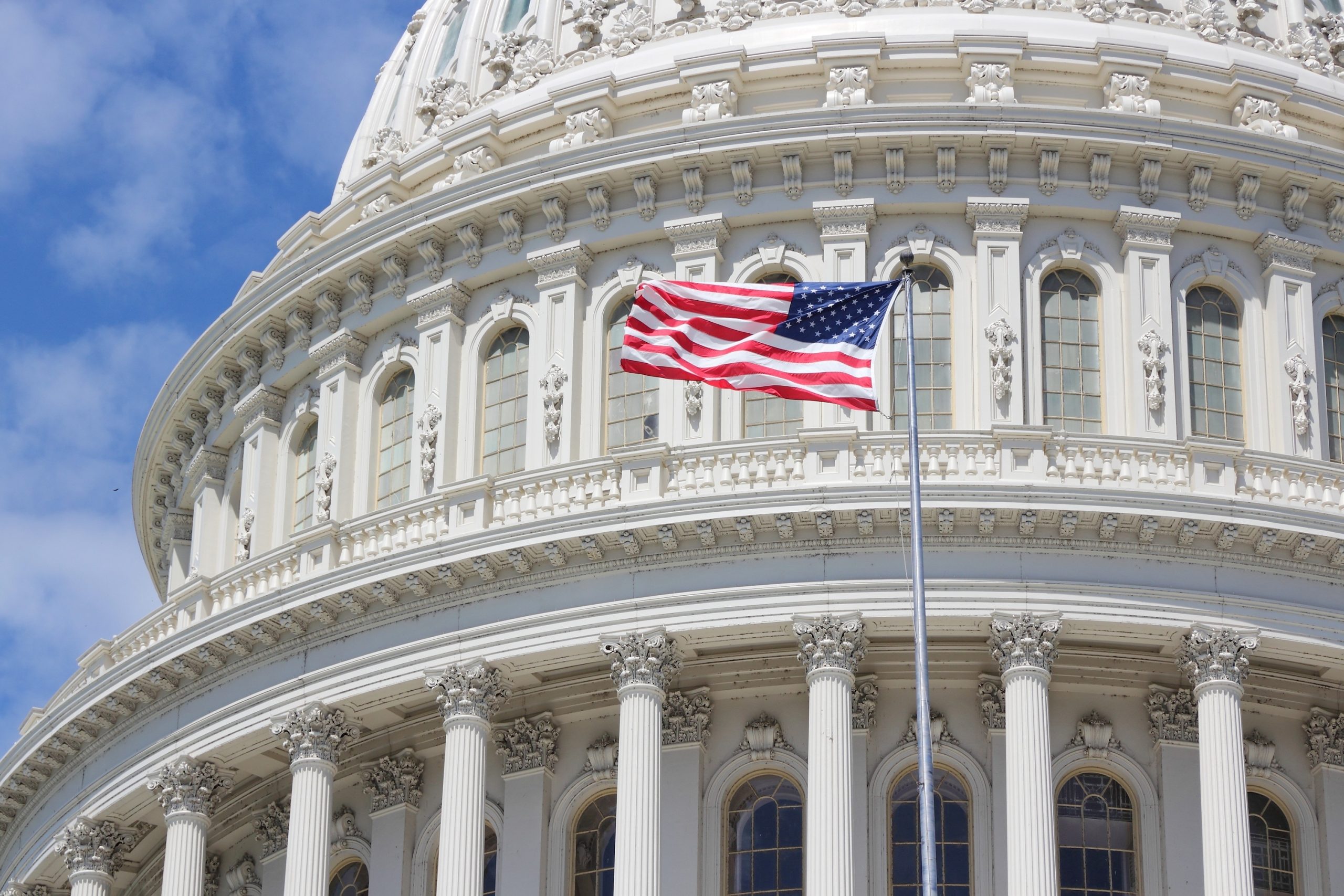 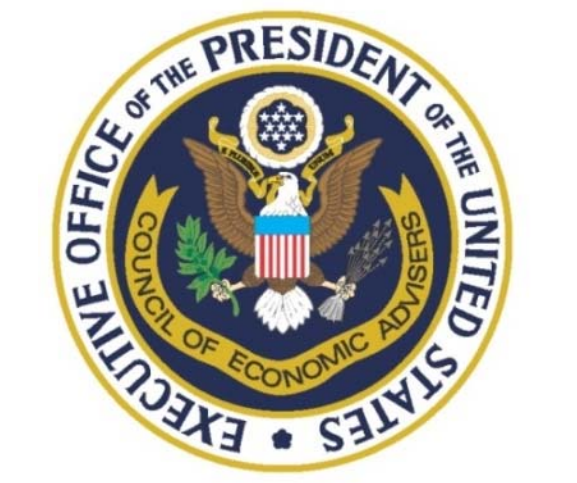 A retrospective assessment of clean energy investments in the Recovery Act
The bold investments in clean energy through ARRA had a substantial macroeconomic impact, supporting the U.S. economy at a critical moment by raising output and supporting jobs.
Low or No Emission Vehicle Program - 5339(c)
Provides funding through a competitive process to states and transit agencies to purchase or lease low or no emission transit buses and related equipment, or to lease, construct, or rehabilitate facilities to support low or no emission transit buses. The program provides funding to support the wider…
Grants for Buses and Bus Facilities Program
Provides funding through a competitive allocation process to states and transit agencies to replace, rehabilitate and purchase buses and related equipment and to construct bus-related facilities. The competitive allocation provides funding for major improvements to bus transit systems that would not…
Biden-Harris Administration Announces Over $1.6 Billion in Bipartisan Infrastructure Law Funding to Nearly Double the Number of Clean Transit Buses on America’s Roads
Bipartisan Infrastructure Law increases funding for low- and no- emission bus grants six-fold and includes worker training on zero-emission buses
RAISE Discretionary Grants
Biden-Harris Administration Announces Funding for 166 Projects to Modernize Transportation Across the Country and Make it More Affordable, Increase Safety and Strengthen Supply Chains President Biden
Diesel Emissions Reduction Act (DERA) Funding | US EPA
The DERA Program offers funding in the form of grants and rebates as well as other support for projects that protect human health and improve air quality by reducing harmful emissions from diesel engines.
Closed Funding Opportunities
Closed Vehicle Technologies Office funding opportunities