The cost of a fee 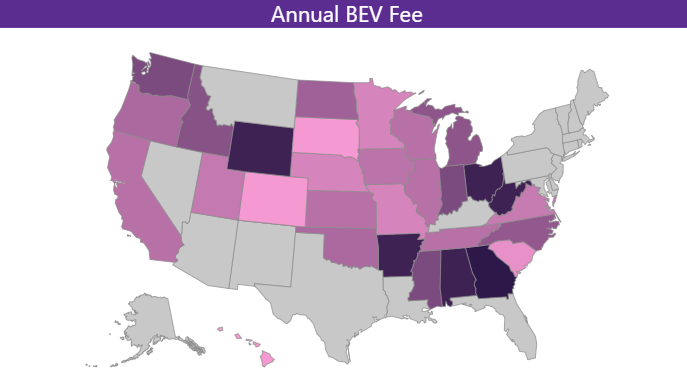 A quick quiz: Name one state that doesn’t charge an EV fee.

California you say? Wrong. There are 22 states that do not charge any fees currently, but the EV capital of the United States is not one of them. California charges an annual fee of $100 for EVs (technically, the fee is $100 to register and then up to $175 per annum). California introduced a fee in 2017 that became operational last year. Alongside an EV fee, there was also an increase in the gas tax.

In fact, the states that do not charge a fee are a mixed bag of mostly blue states and then some low-tax states (Alaska, Florida, and Texas). As part of the Atlas EV Hub, we track fees across states for EV owners. Around the country, fees vary significantly by state. The average fee for the states that charge fees is $121.

As the country strives to have 50 percent of all passenger car and light truck sales be EVs by 2030, financial incentives and disincentives will play a crucial role.

States continue to push for EV fees. Florida state legislators have tried twice already this year to institute a fee (there is no fee currently) but failed both times – including one bill to introduce a fee of $235. Georgia has the highest fees in the country of $214 a year for Battery Electric Vehicles (BEV).

So how much do these fees impact consumers?

Analysis out of UC Davis indicates that EV fees could reduce sales by 10 to 24 percent. Those same researchers also found that EV drivers already pay more taxes than internal combustion engine (ICE) vehicle owners, noting that, “Studies in Minnesota and California found that electric vehicles actually generate at least as much revenue (on a per-vehicle basis) for states as gas-powered vehicles do.”

What about this idea of EV drivers paying their fair share? A paper from Consumer Reports from 2019 classified fees as punitive, or not based on their cost relative to the gas tax. Their analysis indicates that with the declining gas tax (due to more efficient vehicles and the fact that the tax is not tied to inflation) by 2025, many EV drivers around the country will pay much more than ICE drivers. In fact, their analysis pointed to the fact that more than 10 existing EV fees would be more expensive than the gas tax by 2020.

Part of the reason given is that transportation budgets are in a bad way. So how do we make up for the shortfall in revenue? Two researchers out of UC Davis argue that we should peg the gas tax to inflation and that in the longer term as EV adoption goes mainstream, we could then look at usage-based charges for EVs.

The reality is that EVs make up a tiny proportion of vehicles on the road and so fees attached to EV purchases will do very little to raise the revenue needed to patch up roads but could really disincentivize uptake. You can have a play with Atlas’s Dashboard for Road Network Funding – and see that as you move up the Average Fuel Economy, revenue to the state will continue to drop.

In the meantime, with falling transportation revenue, states will continue to try to impose fees on EVs. That is: just as the federal government attempts to incentivize EV purchases through rebates – albeit with much larger incentives – many states are functionally doing the opposite.