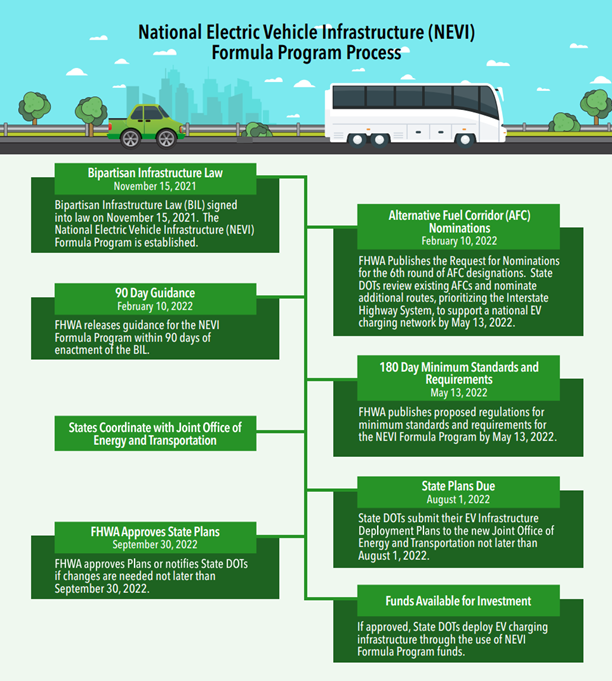 The National Electric Vehicle Infrastructure (NEVI) Formula Program is moving quickly. We are now just two weeks out from the due date for state plans to the Joint Office of Energy and Transportation.

To recap, states must submit an EV Infrastructure Deployment Plan that describes how it will use its apportioned NEVI funds no later than August 1st, 2022. The Federal Highway Administration (FHWA) will then approve eligible plans by September 30th, 2022 or send them back for required revisions.

Authorized under the Infrastructure Investment and Jobs Act (IIJA), the NEVI program makes $5 billion available through formula grants to states for the build out of a nationwide EV charging network along alternative fuel corridors. We are tracking this program on our newly released NEVI Dashboard and covering key developments including the release of the Joint Office’s 180-day minimum standards and the Justice40 initiative.

With less than two weeks until the August 1st plan submission deadline, here is what we know so far:

41 States and D.C. have NEVI webpages

Since the release of the NEVI Program Guidance in February, we have seen many states publish a NEVI website to share updates, resources, and stakeholder engagement efforts to help inform the development of their plan. The states without a NEVI website include Alabama, Hawaii, Nevada, Illinois, New Jersey, South Carolina, Maine, Georgia, and West Virginia. The Alabama Department of Economic and Community Affairs (ADECA) has a page for EV Infrastructure planning however, it is unspecific to NEVI.

Ten more states have now released their draft NEVI plans since our last update. Here is a list of states with draft plans:

While it’s not a complete written plan, Minnesota has released proposed fast charger locations using NEVI program guidelines. Alabama has published an Electric Vehicle Infrastructure Plan prior to the release of NEVI guidelines to serve as a guide for planning for EV infrastructure deployment in the state, including the mention of the NEVI program’s federal funding.

To view the links to the released draft plans, see our NEVI Dashboard. 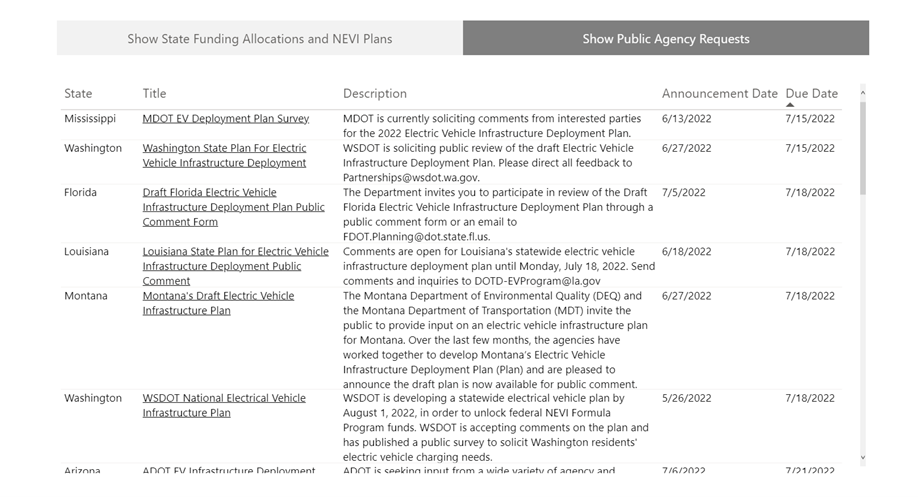 There are a number of events over the next few weeks including:

Also, the BlueGreen Alliance issued some NEVI plan recommendations and the DOT issued an announcement on Alternative Fuel Corridor designations.

Have we missed anything? Let us know!