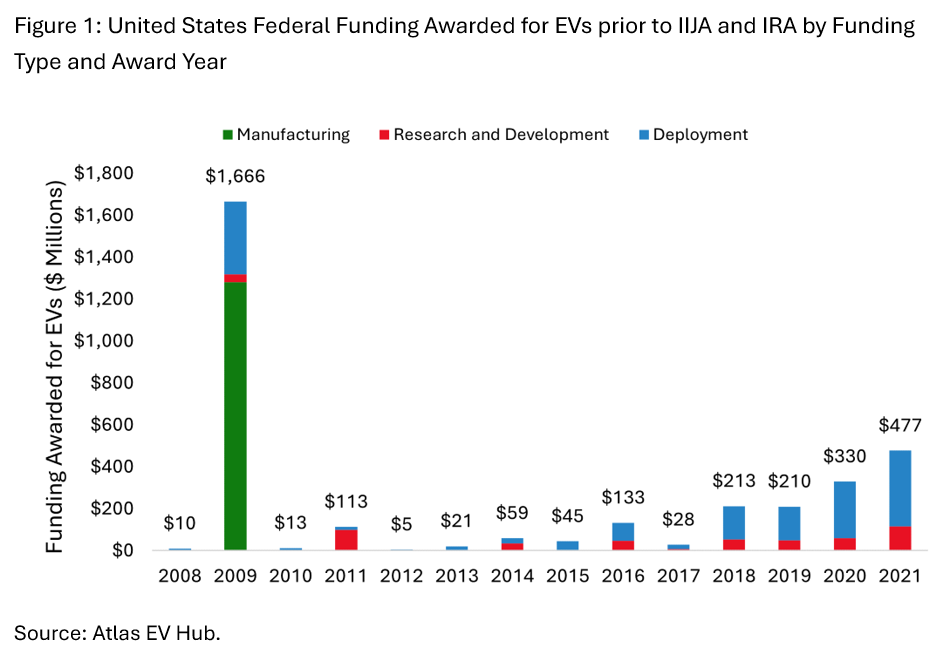 With the recent passage of the Inflation Reduction Act (IRA) and the Infrastructure Investment and Jobs Act (IIJA), we are seeing an unprecedented amount of federal dollars going towards electrifying transportation in the United States.

The latest data story from Spencer Burget and Nicole Lepre of Atlas Public Policy aims to put the unprecedented scale of these federal EV investments in historical context. The story tracks federal government investments in EV research and development, manufacturing, and deployment dating all the way back to 2008. The authors reviewed publicly available program documents and funding announcements to see what can be learned about federal investments in EVs to date, and what it means for the implementation of IIJA and IRA.

Here are three takeaways from the data story:

1. Atlas tracked $3.3 billion awarded by the United Sates government for EVs across 16 programs prior to IIJA and IRA (not including loans or tax credits). The American Recovery and Reinvestment Act of 2009 (ARRA) accounts for more than half of that investment with more than $1.6 billion awarded for EV manufacturing and deployment. ARRA paved the way for today’s EV market and supply chain in the U.S. Under ARRA, the Electric Drive Vehicle Battery and Component Manufacturing initiative kickstarted U.S. based manufacturing of batteries and electric vehicle components while the Transportation Electrification Initiative supported the deployment of more than 6,000 early EVs and more than 14,000 Level 2 charging stations. The EV investments in IIJA and IRA have the potential to be even more transformative than ARRA was over a decade ago.

2. Electric transit buses have led the way, accounting for 60% of federal funding focused on EV deployment. The Federal Transit Administration (FTA)’s Low- or No-Emission (Low-No) Grant program awarded more than $850 million for electric transit buses prior to IIJA or IRA, representing the second largest federal funding source for EVs. Moreover, 92 percent of all Low-No funding has gone towards EVs, a higher percentage than any other federal program. IIJA increases Low-No funding by nearly ten times, with $5.5 billion available from FY 2022 to FY 2026. The Fiscal Year 2022 Low-No awards were announced in August, and are expected to nearly double the number of ZEV buses on the road in the U.S.

3. The $100 billion for which EVs are eligible in IIJA and IRA represents nearly 30 times the total EV funding awarded by the U.S. government to date. So far, most federal funding for EVs has come from programs that are primarily dedicated to EV development such as ARRA grants and Low-No. However, most of the funding in IIJA and IRA is for broader transportation infrastructure programs that fund EVs as well as vehicles of other fuel types (such as the Congestion Mitigation and Air Quality Improvement Program (CMAQ) and the Rebuilding American Infrastructure with Sustainability and Equity (RAISE) program. Historically, only a small portion of funding awarded under these programs has gone towards EVs, and overall, only 20 percent of all federal funding for which EVs were eligible went to EVs. With more EV-eligible federal funding available than ever, it will be crucial to maximize these programs’ potential to catalyze the EV market.