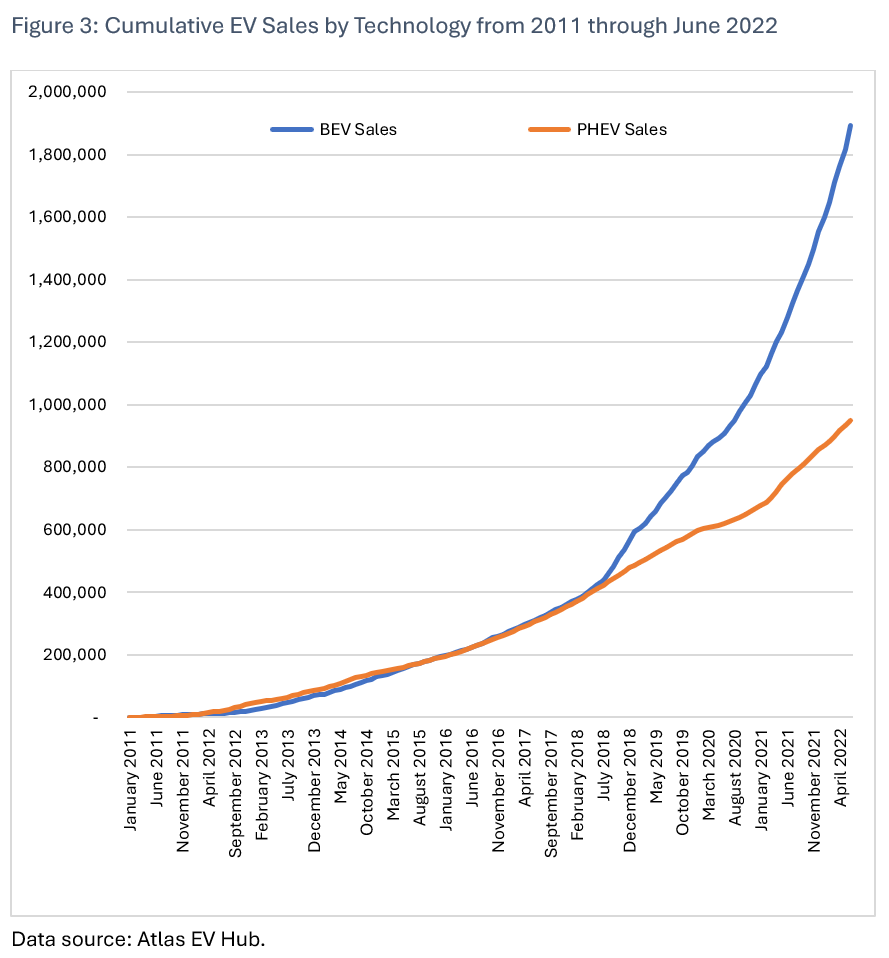 When we talk about EVs, we oft lump two types of vehicles together – Battery Electric Vehicles (BEV) and Plug in Hybrid Electric Vehicles (PHEV). Both get plugged in but the former are powered solely by electricity and the latter are powered by electricity and gasoline. The batteries of PHEVs are much smaller – generally with no more than 40 miles of electric range. The PHEV was designed as a halfway, to help people get used to the idea of electric vehicles and buy time as infrastructure adjusts for EV fleets.

Through mid-2018, the two technologies were virtually inseparable in the EV market. Then something shifted – Tesla. More specifically, the Tesla Model 3 hit the market and provided drivers a vehicle that was high tech, more affordable, and cool, all while being powered exclusively by electricity. As you can see, the arrival of the Model 3 marked the beginning of the divergence of BEVs and PHEVs.

To date, BEVs have made up two thirds of all EV sales. If the trend continues, that proportion may continue to grow. In the first half of 2022, BEVs made up 78 percent of the EV market. When we look at the top 10 best-selling models from Q2 2022, nine of the ten are BEVs. Only the Jeep Wrangler 4xe is a PHEV. The rest are all BEVs.

The New York Times published a piece in August 2022 that announced an uptick in PHEV sales. That is true but misses the forest for a much bigger forest: BEVs. The curves on the chart don’t lie.

The divergence is potentially good news for the climate. PHEVs may be much less climate friendly than their BEV counterparts. For one, they draw on gasoline once the battery has been expended. That is, if a battery has a 40-mile range and you drive it 100 miles without charging, then it will draw on 40 miles of electricity and 60 miles of gasoline.

Data indicates that the reality is even worse than the theory, emissions wise. A study published by the ICCT in June 2022 indicated that PHEVs use even more gasoline than we may expect. The researchers drew on real world data from across Europe (though most of the data is from Germany) to understand the proportion of the trip that was traveled via electricity compared with gasoline.

The researchers suggest that people don’t use electricity that often, for instance, “The average real-world electric driving share is about 45%–49% for private cars and about 11%–15% for company cars”. Unsurprisingly, the bigger the electric range, the more electric miles traveled. This data suggests that PHEVs use gasoline more than half the time and that for particular functions – for light duty fleets – PHEVs may be a particularly poor option. The authors recommend, based on the higher real-world emissions, that PHEVs not be included in zero- and low-emission vehicle (ZLEV) credits in the European Union’s CO2 emission standard.