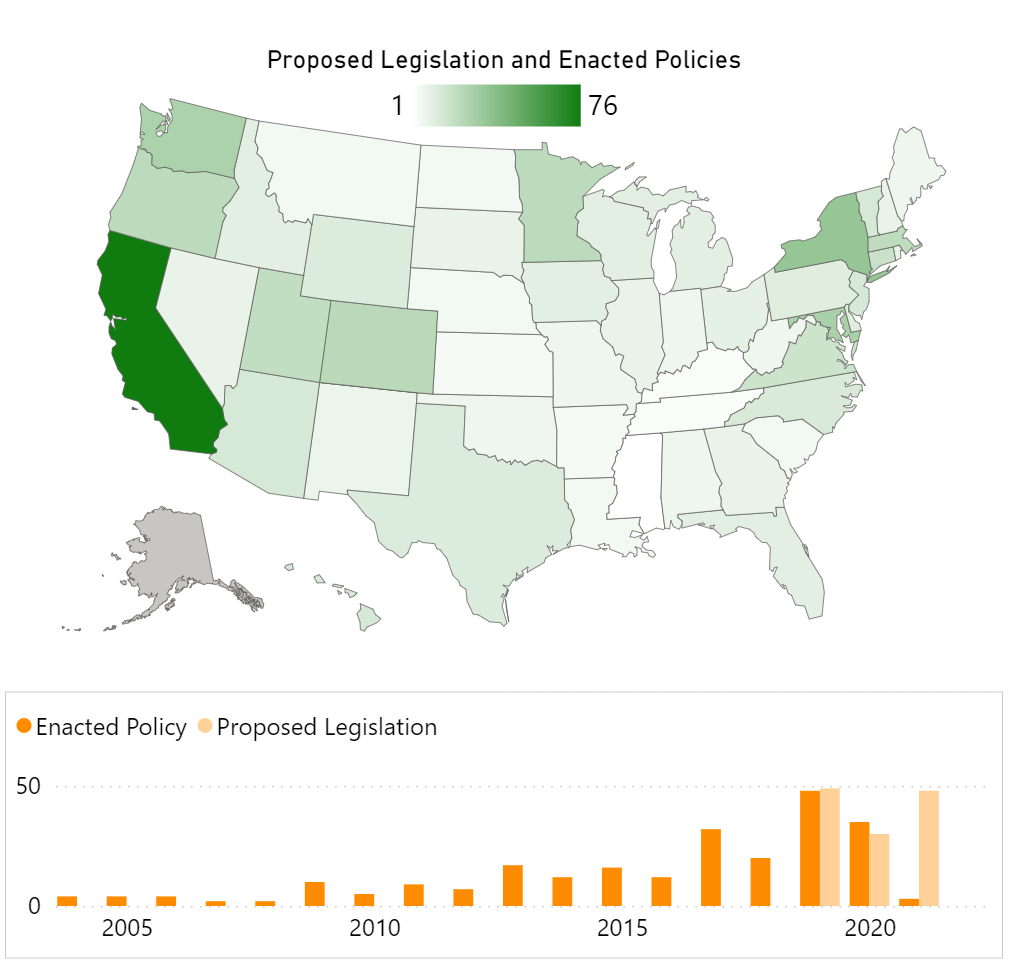 The first half of 2021 has seen a flurry of state action on transportation electrification.

Nevada and Colorado both took steps to boost funding for electric vehicles and charging infrastructure. On May 31st, Nevada’s Legislature passed SB 448, which will require the state’s largest utility, NV Energy, to invest $100 million in charging infrastructure over the next three years with a minimum of 40 percent of this investment required to be made in underserved communities. Two days later, Colorado’s Legislature passed SB 260, a sweeping transportation spending bill worth over $5 billion that includes dedicated funding for EVs and EV charging infrastructure. The bill establishes the Clean Fleet Enterprise within the Department of Public Health and Environment and the Clean Transit Enterprise within the Department of Transportation to specifically support the electrification of private and transit fleets. Funding comes from the federal American Rescue Plan as well as new fees imposed on gasoline and diesel fuel sales, parcel deliveries, and TNC rides. Both bills now sit on the Governors’ desks.

In Oregon, Governor Kate Brown signed House Bill 2165 into law on May 26th, expanding access to electric vehicles and charging infrastructure with a strong focus on equity. The bill extends the state’s EV rebate programs and doubles the bonus rebate for low- and moderate-income households to $2,500 for used vehicles and $5,000 for new vehicles. With the new rebate in place, income-qualified customers can get a state rebate of up to $5,000 off a used car or $7,500 off a new car. Furthermore, the bill establishes a new transportation electrification utility surcharge and directs at least half of the funds collected to benefit underserved communities.

California and Hawaii are both taking aim at shared mobility companies, which account for a growing percentage of vehicle miles traveled in the United States. On May 20th, following the direction of SB 1014 (2018), the California Air Resources Board approved the Clean Miles Standard, which requires 90 percent of vehicle miles traveled by Transportation Network Companies (TNCs) such as Uber and Lyft to be fully electric by 2030. Earlier this year, Democrats in Hawaii’s House introduced legislation that would require rental car fleets to transition to 100 percent zero-emission vehicles by 2035. HB 1141 is currently in committee in the House. Shared mobility vehicles have become popular targets for electrification because they tend to travel more miles on average than private passenger vehicles, leading to greater operational savings and emissions reduction benefits on a per-vehicle basis.

On the medium- and heavy-duty side, New Jersey and New York are both moving to adopt California’s Advanced Clean Trucks Rule that sets zero-emission sales requirements for medium- and heavy-duty vehicles. The New Jersey Department of Environmental Protection issued a notice in April signaling the state’s intentions to adopt California’s rule and opened a public review and comment process that will remain open through June 18, 2021. New York Senate Democrats introduced Senate Bill S4097 in April to direct the Commissioner of the New York Department of Environmental Conservation to establish formal regulations similar to those under California’s Advanced Clean Trucks Rule. As other states follow suit, California is working on complementary legislation before the Advanced Clean Trucks Rule takes effect in 2024. The California State Senate passed SB 372 on June 2nd, which would establish a medium- and heavy-duty fleet purchasing assistance program to help fleets comply with the upcoming regulation.

Keep track of all these bills and more on the EV Hub’s new State Policy Dashboard.