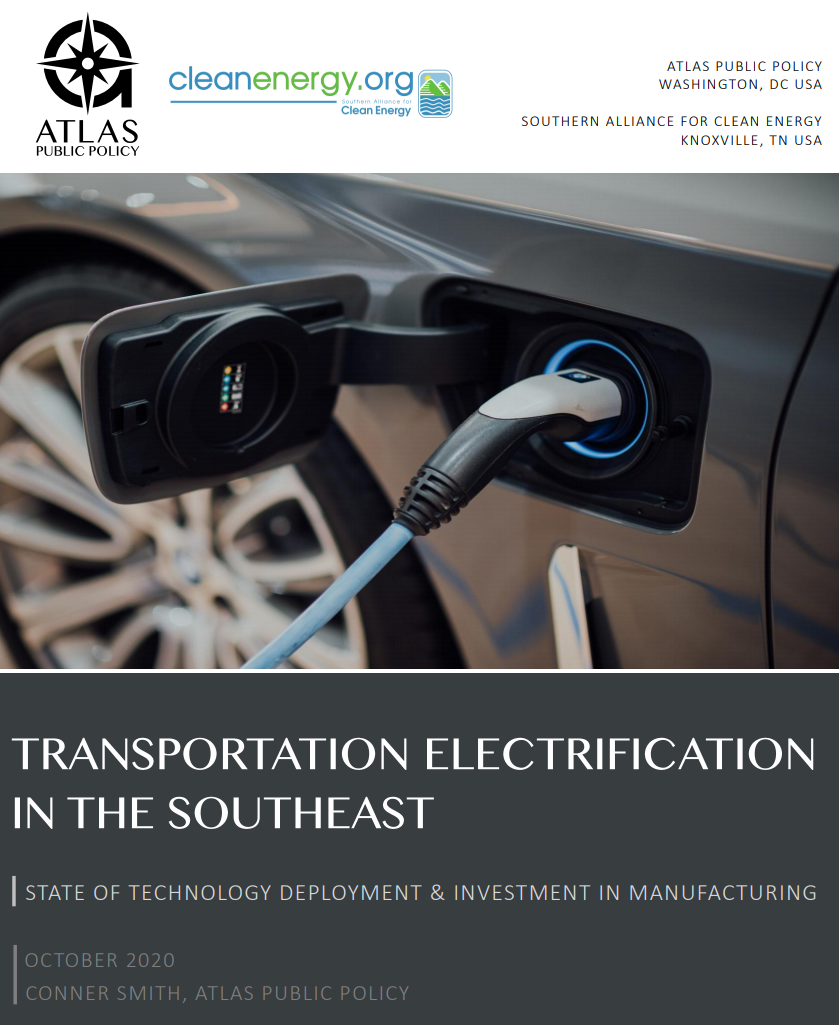 The rise in passenger EV adoption and transportation electrification more broadly throughout the United States since 2018 has generated different outcomes around the country. While states on the West Coast and in the Northeast lead in terms of EV deployment per person, the Southeast has emerged as a hotbed for EV manufacturing. However, the presence of large passenger EV manufacturing facilities has not translated into support for transportation electrification in other areas, such as passenger EV adoption, EV charging deployment, government funding, and utility investment in transportation electrification. Our new report, produced in partnership with the Southern Alliance for Clean Energy, provides a deep dive into the current state of the EV market in six states across the Southeast.

According to data compiled in our Automakers Dashboard, the Southeast supports more than 3,200 direct EV manufacturing jobs and over $4 billion in manufacturing investments for passenger vehicle production. This number does not include investments or employment from medium- and heavy-duty vehicle manufacturers or companies that produce only components such as batteries. For example, it excludes a $2.6 billion battery plant under construction by SK Innovation in Georgia as well as several facilities set to produce electric buses and trucks in the region. Manufacturing investments continue to roll in with United Kingdom-based electric bus and truck startup, Arrival, announcing on October 12th plans for a $46 million manufacturing plant supporting 240 jobs in South Carolina. The announcement included plans for the manufacturer to supply electric delivery trucks to UPS and was followed by a $118 million investment from BlackRock.

On the deployment side of the equation, the Southeast accounts for 10 percent of the national passenger EV market due largely to the fact that Florida has the third-highest passenger EV sales in the country. Georgia also contributes a significant portion of the region’s EV sales as a result of an EV tax credit that was in place between 2013 and 2015. Based on the findings of a separate deep dive we conducted into the transportation electrification sector in Florida, the EV market in the Florida was one of few EV markets in the country to hold steady through the duration of the COVID-19 pandemic. Nationwide, EV sales were down 29 percent through the first half of the year while they were flat in the Sunshine State.

The EV market in strongholds like Florida has shot up since 2018 as the region has begun to develop supportive policies and transportation electrification strategies. Every state in the region besides Georgia has begun to implement plans to roll out EVs and charging infrastructure to varying degrees with both North Carolina and Tennessee establishing specific passenger EV deployment targets. Florida’s enacting of the Essential State Infrastructure Bill in June 2020 establishing statewide guidelines for charging infrastructure has already contributed to an increase in electric utility programs targeting transportation electrification. By signing on to the ZEV Truck and Bus MOU in July 2020, North Carolina became  the only state in the region to set clear targets for medium- and heavy-duty electrification.

Policy actions such as these are among the concrete steps states in the Southeast can take to create a virtuous cycle where investments in EV manufacturing are supported by a growing regional demand for EVs and EV charging. There is more than $80 million in pending utility investment across Florida and North Carolina and Duke Energy was just approved in September 2020 to invest $8.8 million in EV charging in South Carolina. Medium-and heavy-duty EV deployment could also see a large boost with more than $350 million in Volkswagen Settlement funding remaining across the region that could go to support transportation electrification. EV manufacturing investment and employment is on the rise in both the Southeast and beyond with more than 60 new models entering the market by the end of 2022. Several of these new offerings will be manufactured in the Southeast, positioning drivers in the region to provide support for manufacturing and employment in their own home states. See the Automakers Dashboard to track EV indicators and market statistics across the country.