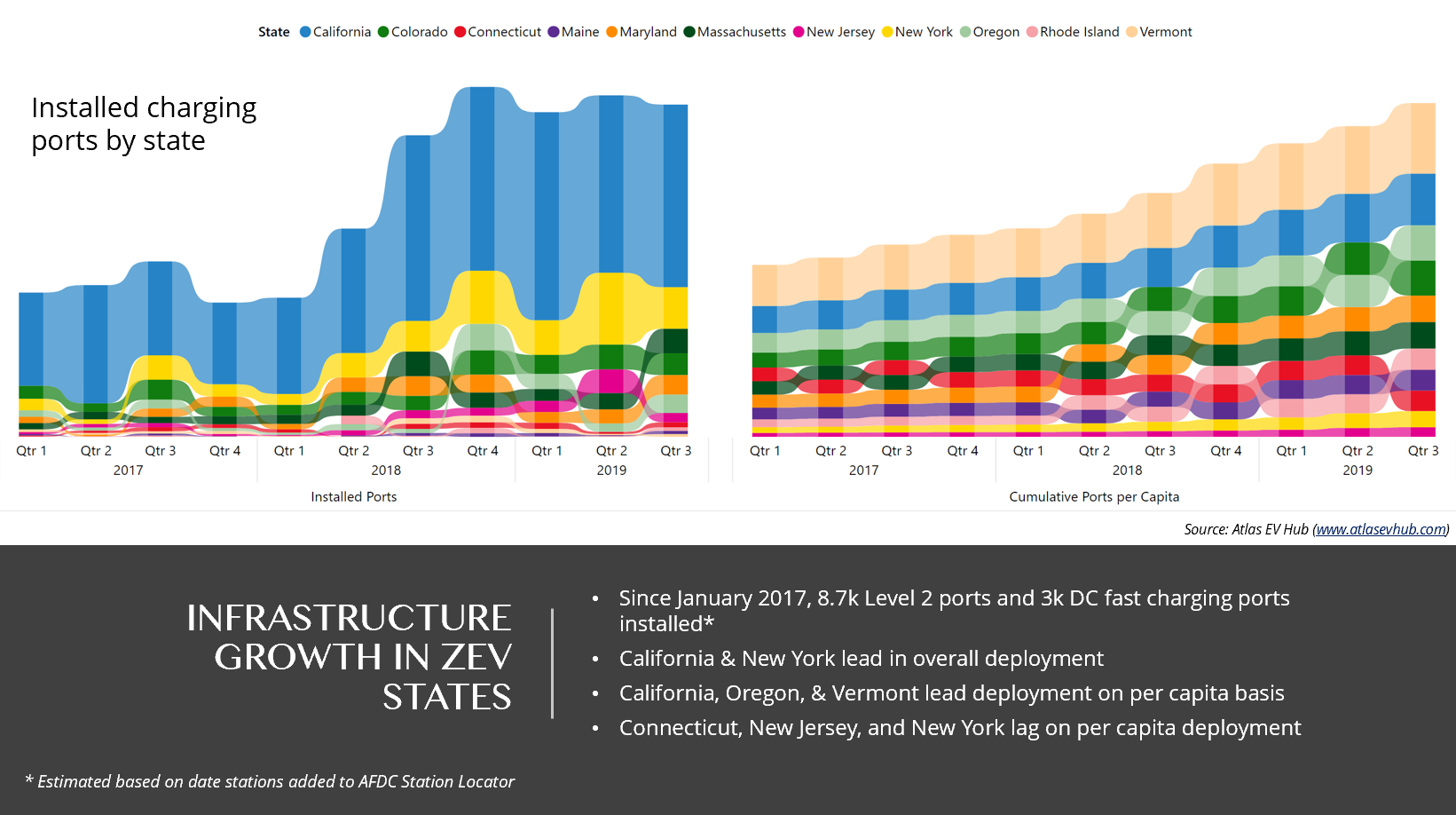 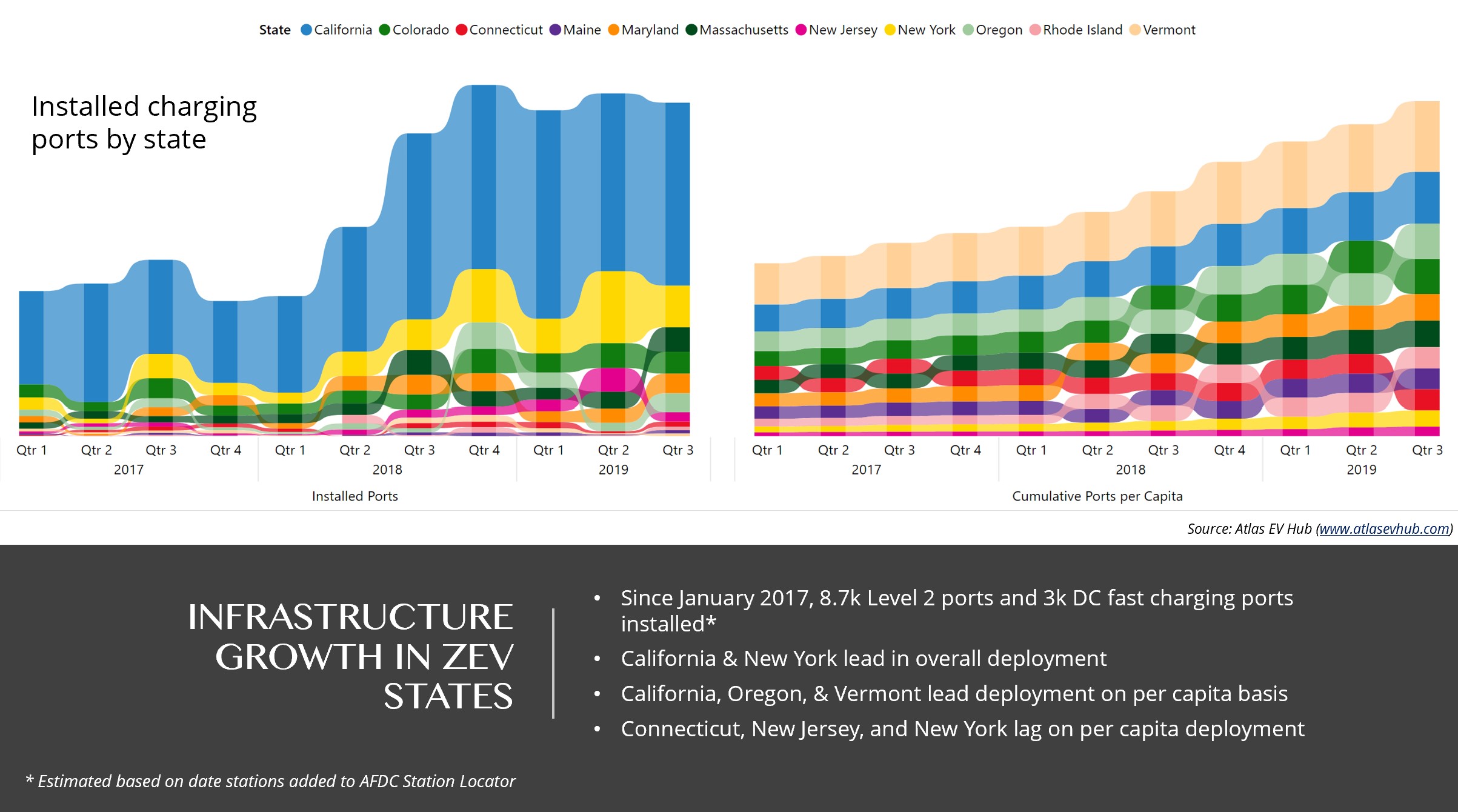 U.S. EV sales were down 21 percent in the third quarter compared to the same period in 2018. This marks the first quarterly decline in sales since the third quarter of 2015. Even Tesla has experienced declining growth with Model 3 sales down 19 percent compared to last year. Despite this drop, Tesla still accounts for almost 60 percent of U.S. EV sales in 2019 and the automaker continues to surpass their own records for global deliveries.

Declining sales has not seemed to slow down automakers commitments to transportation electrification investment. More than $830 million in new private investment was announced in the third quarter, adding to the total $348 billion in private investment tracked by the EV Hub. One third, $277 million, of the new announcements fall in the medium- and heavy-duty vehicle sector. The EV charging market also continues to grow with new investments from charging service providers including Volta Charging. Increasing private and public investment in charging infrastructure is helping to improve the business case for hosting charging stations. New York is one of the leading states for total EV charging deployment and a recently published report from Atlas and the New York State Energy Research and Development Agency (NYSERDA) reveals pathways to profitability for station hosts.

While all of the major automakers have committed some amount of investment to electrification, the battle around emissions standards is beginning to reveal a divide between these companies in the policy space. In July, four automakers including VW, Ford, BMW, and Honda signed onto an agreement with California to maintain existing emissions standards that are stricter than the rolled-back emission standards expected to be proposed by the Trump administration. The Trump administration blocked this move by revoking California’s authority to pursue independent emissions standards, prompting the Golden State and 23 other states to sue the U.S. EPA in late September. Diverging from this group, several automakers including GM, Toyota, and Fiat-Chrysler recently announced their support of the Trump administration’s proposed rollback of the Obama-era regulations.

The group of automakers siding with California has committed almost $112 billion to electrification compared to the $34 billion committed by the three siding with the Trump administration. A majority of this gap between these two groups is accounted for by VW’s $94 billion dedicated to accelerating the company’s electrification efforts following the fallout from their emissions scandal. Penalties paid by the automaker to the settlement’s Environmental Mitigation Trust are also contributing to transportation electrification around the United States. Almost $32 million out of the total $52 million in VW Settlement funding awards announced in the third quarter will go towards EVs and charging infrastructure.

In the absence of leadership from the federal government, states are stepping up their electrification efforts to accelerate regional markets. In the third quarter, Colorado became the 11th state to join the California-led ZEV program and both Minnesota and New Mexico announced plans to consider joining the program. States like Colorado have also led on new legislation, including policies directing electric utilities in the state to propose transportation electrification plans. Xcel Energy submitted a new filing in the state in the third quarter worth nearly $4.4 million. Nationwide, electric utilities were approved to invest more than $148 million in programs supporting transportation electrification in three states. A major rejection of several programs proposed by National Grid in Massachusetts led to the denial of $154 million in potential third quarter investments from electric utilities. Atlas’s Electric Utility Filing Bi-Annual Update published in September recounts the activity through the first half of the year.

Join us for our webinar on November 19th at 2 p.m. EST where we cover these and other findings from the third quarter in greater detail.