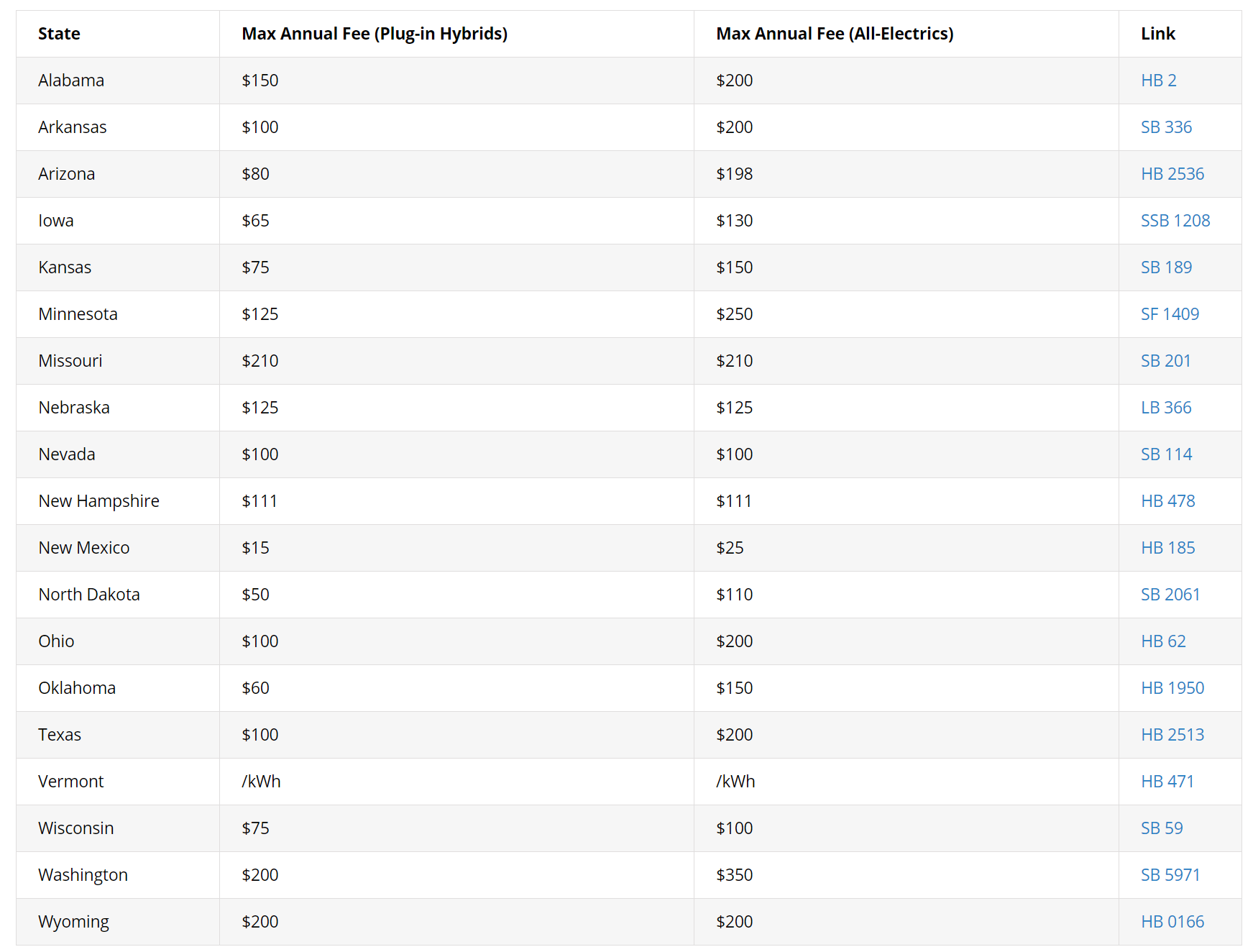 Before 2019, 20 states had already enacted annual registration fees on electric vehicles. New developments in 2019, outlined in the table above, have the potential to add 11 states to that list. For context, only 2 new states passed fees in 2018.

TABLE SHOWS EMERGING LEGISLATION AND TRENDS FOR 2019 ONLY

EVs are being targeted to fill transportation funding gaps resulting from declining motor fuel taxes. According to David Greene at the University of Tennessee, this decline stems primarily from inflation and increased fleet fuel economy. Annual registration fees for EVs are seen as one option to recover a portion of this lost revenue that funds vital transportation projects. Despite the active debates like the one playing out in Alabama concerning the effectiveness of these fees at combating funding problems, the momentum in state legislatures is undeniable.

Annual fees are seen as a way for EV drivers to pay their fair share towards funding the road network. Calculating the loss in motor fuel tax revenues from driving an EV is straightforward and reveals that fees already in place and under consideration often far exceed what can be considered “fair.” A Georgian driving an efficient Toyota Prius for 10,000 miles per year, for example, would pay less than $75 in gas taxes per year. An EV driver in the state would pay $214 regardless of how far they traveled.

Punitive fees like those in Georgia could discourage EV adoption, though the effects are still murky. Once among the fastest growing EV markets in the country, Georgia experienced a 90% drop in EV sales after ending its $5,000 tax credit and enacting the sizeable annual fee for all-electrics. A University of California Davis report published early this year found that a proposed annual fee of $100 for EV drivers in California could decrease EV purchases by a considerable amount (up to 24 percent) in the near term. The study found that these effects decrease over time as awareness of the fees becomes widespread.

The existing road network is funded through a variety of mechanisms, including general fund appropriations, motor fuel taxes, tolls, property taxes, and other measures. EV drivers already contribute to road funding through all of these means except motor fuel taxes, which account for only 35 percent of total revenue raised for roads according to the Federal Highway Administration. The transportation funding community is actively exploring solutions to the sizeable funding gaps and are best positioned to address the issue.

For EVs, the increased activity in state legislatures around fees looks to be more about hampering EV adoption than about sustainably funding the road network. We’re actively working on new dashboards to help you make sense of our how roads are funded today and to make it easier to track legislation related to EVs. Stay tuned as we pull these data together and make it more accessible to our users.