Making Sense of NEVI Plans: A Conversation with Sam Houston 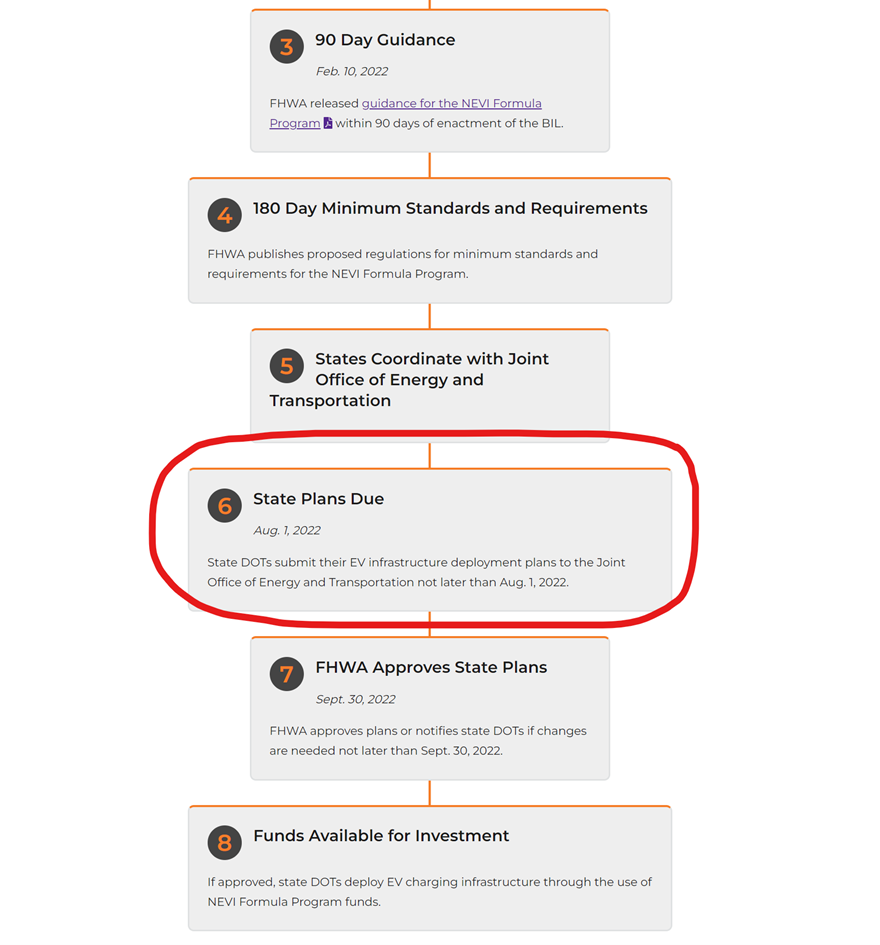 Before we begin, five more states have released their draft NEVI plan, including Maryland, Oregon, Indiana, Nebraska, and Rhode Island. View those plans on our NEVI dashboard.

For this week’s digest, we sat down with Sam Houston to get her take on a few states NEVI draft plans. Sam is a Senior Analyst with the Union of Concerned Scientists (UCS). At UCS, Sam works to promote public policy and private investments for electric vehicle infrastructure, as well as provide analysis on integrating electric vehicle charging loads on the electric grid.

What plans have you looked at so far and from those plans can you talk about anything that may have surprised you?

I pulled four plans to look at as a starting point, and those plans are Alabama, California, Texas, and Wyoming. I intentionally wanted a bit of a cross section of, let’s just say different kinds of states, states with different kinds of priorities, different kinds of politics, different places on EV adoption. At a high level it’s sort of surprising to me that a lot of states have been going through a plan proposal, comment, and refinement period. That was a pleasant surprise.

The Alabama plan I reviewed is a January 2022 version released by the Alabama Department of Economic and Community Affairs—not the Alabama Department of Transportation. It is not clear that this plan or a version of this plan is what the Alabama DOT will submit to the Joint Office for approval to get the state’s NEVI funds. However, the plan does share a strategy for spending NEVI funds in the context of other available programs in the state, and at a minimum, provides a strong foundation for a plan that could be submitted to the Joint Office.

Alabama was an interesting read. They want to maximize the use of federal dollars, and they’re considering the NEVI funding in the context of other EV infrastructure funding that is available in their states, particularly a little bit of funding from the state and VW funds. And this plan gave us a holistic look at Alabama. They were very positive about the whole thing, and I think the telling evidence for why is the discussion of the new and rising EV manufacturing in the state. I think that’s an interesting and important point, which is that the presence of EV manufacturing or anything in the EV charging supply chain can be a convincing influence in these states in terms of the economic opportunity.

In California, it was interesting to see that they’re taking a corridor gap segment approach to what they’re calling a Grant Funding Opportunity when they’re soliciting proposals. California plans to divide Alternative Fuel Corridors, or AFCs, into segments based on infrastructure and market gaps. Grant funding applicants are to submit proposals to install charging stations on California’s segmented AFCs. It is not totally clear how big a segment might be. I think that is an interesting way to scale up quickly, but also gives me a little concern that there might be some more difficult segments that are undersubscribed for applicant interest due to particular sites that are challenging.  And it might cut out some smaller applicants who might do a really good job on a smaller, single or couple of station project versus the whole segment.

The other thing that was kind of surprising to me was the timeframe that they gave. California says they expect their first solicitation for proposals to go out in the winter of this year, 2022. And based on timelines from previous EV charging installation projects, they don’t expect the first charges to be operational until Q2 of 2025, with the full build out completed by 2030. I think the potential for delay and just the long timeframes that some of these projects are working under is not something to set aside. I think it’s an important thing to pay attention to see if we can shorten some of these timelines or figure out ways to move a little bit faster.

In Texas, we also saw the manufacturing theme come up, and they specifically mentioned Gigafactory Texas. Another interesting thing that came up is that outside of the alternative fuel corridors, Texas is contemplating a charger in every county seat to make sure that the pretty substantial amount of rural areas in the state are going to be covered. It’s interesting to see Texas think about the corridors, the county seats, and then also, for the more urban areas, working with metropolitan planning organizations. This is good systematic thinking in terms of how to address different kinds of areas.

In Wyoming, I don’t know if I was surprised, but it was interesting to read. I guess you could say the state DOT had a very candid tone about what they thought of certain of the requirements of the NEVI program and about the viability of those stations following the NEVI program period. What it boiled down to was that if the state can’t get exceptions to some of the requirements, particularly the spacing of stations and also the ability to use funds on roads that aren’t Alternative Fuel Corridors, particularly roads that lead to their tourist attractions, the state and national parks, that they are not going to use all the money — they’re going to give the rest of it back. If no exceptions are granted, they said they’re going to build four stations in key areas, and it’s going to cost about $7 million with the operations and maintenance included. And that’s where they’re going to stop.

How have states talked about operation and maintenance costs for chargers?

Looking at the federal dollars that can be spent on operations and maintenance, we see states taking different approaches. As I mentioned for Wyoming, they are going to basically max that out because they don’t see those stations being viable at all without that. We see Texas, and I would say Alabama too, focusing on the rural need for support and operations and maintenance, although they haven’t necessarily pinned down any particular number or a dollar amount. In California, they are going to preference applications that minimize public funding request. So that would be the capital expenditures for the chargers and install as well as the operations and maintenance.

I think the rest of the operations and maintenance spending in pretty much all places is going to rest really heavily on the responses to the request for proposals, or however the state is calling their solicitation of proposals, it appears that states are going to ask that applicants outline their plan to cover those costs as well as meet the uptime requirements, which is another thing I know a lot of us are interested in. So the RFP and application process, is where a lot of this is going to shake out.

Between the states you have reviewed, are you seeing different numbers of charging ports or levels of electricity capacity being prioritized?

There’s a lot of discussion of how states will, at least, build what Wyoming has deemed a “NEVI-sized station.” It will take some dedication to build out the NEVI-size stations, especially if they end up being required in the rulemaking, not just the guidance. So, there was understandably a lot of focus on that. Interestingly, Texas said, for DC fast charging stations, there is a maximum of eight ports, which is not a technological thing. It’s to make sure that the funds can be spread out.

One notable difference in Alabama is they will do higher power levels at charging stations that are on hurricane evacuation routes. The idea being if have an evacuation, those stations are going to need to be able to turn over vehicles, to charge and get them on their way, and get more vehicles through much faster. So that was one place where I did see the need for higher power called out, which I think in terms of disaster preparedness is an important thing. Credit to Alabama for thinking that through.

Equity is obviously of high-level interest and importance with NEVI, especially with the Justice40 initiative. How have states have been talking about and addressing equity in their plans?

That’s something that I was reading for as well. In Alabama, the equity focus centers on low income and rural, but low income is the main demographic they’re looking at. That showed up as well in Texas, a focus on low income and, to some extent, rural. Wyoming’s discussion is really all about rural. They believe they’ll have no problem with Justice40 because the whole state is rural, and so within the context of that discussion, it seemed like they’re just assuming that all the benefits are going to accrue will count for Justice40.

In California, there are a lot of moving pieces. They have a statutory requirement to deliver 50% of benefits to low income and disadvantaged communities. Those definitions are highly overlapping, but not totally overlapping, with the definitions of disadvantaged and underserved communities we get from the Justice40 tools. They have a whole map with an overlay of both, and you can see where those areas coincide or don’t. But with either the CalEnviroScreen tool, the Justice40 tool or both, the equity designations cover a lot of the state, so it’ll be interesting to see how they can prioritize within that.

Lastly, we’re a few days away from the deadline for NEVI plans to be submitted. Some states don’t have a designated a NEVI page, and many states have yet to release their draft plans. Are you concerned that some states will not submit their plans in time or at all?

Yes, I’m concerned that some states will not submit their plans in on time or at all. What will happen, in my mind, is somewhat of an open question. I would hope that states who are close can get a little bit of grace to submit plans late.  I’m hoping August 1st isn’t the hard stop that it could be. On balance, giving states some extra time or help and resources to submit a plan is worth the slight delay in my view, particularly those states who are lagging on EV adoption.  It’s worth noting that these plans have to be updated annually. It’s not like August 1st is the end of all NEVI planning. It’s every year for five years, and so we’ve got to get states on the on ramp for this.