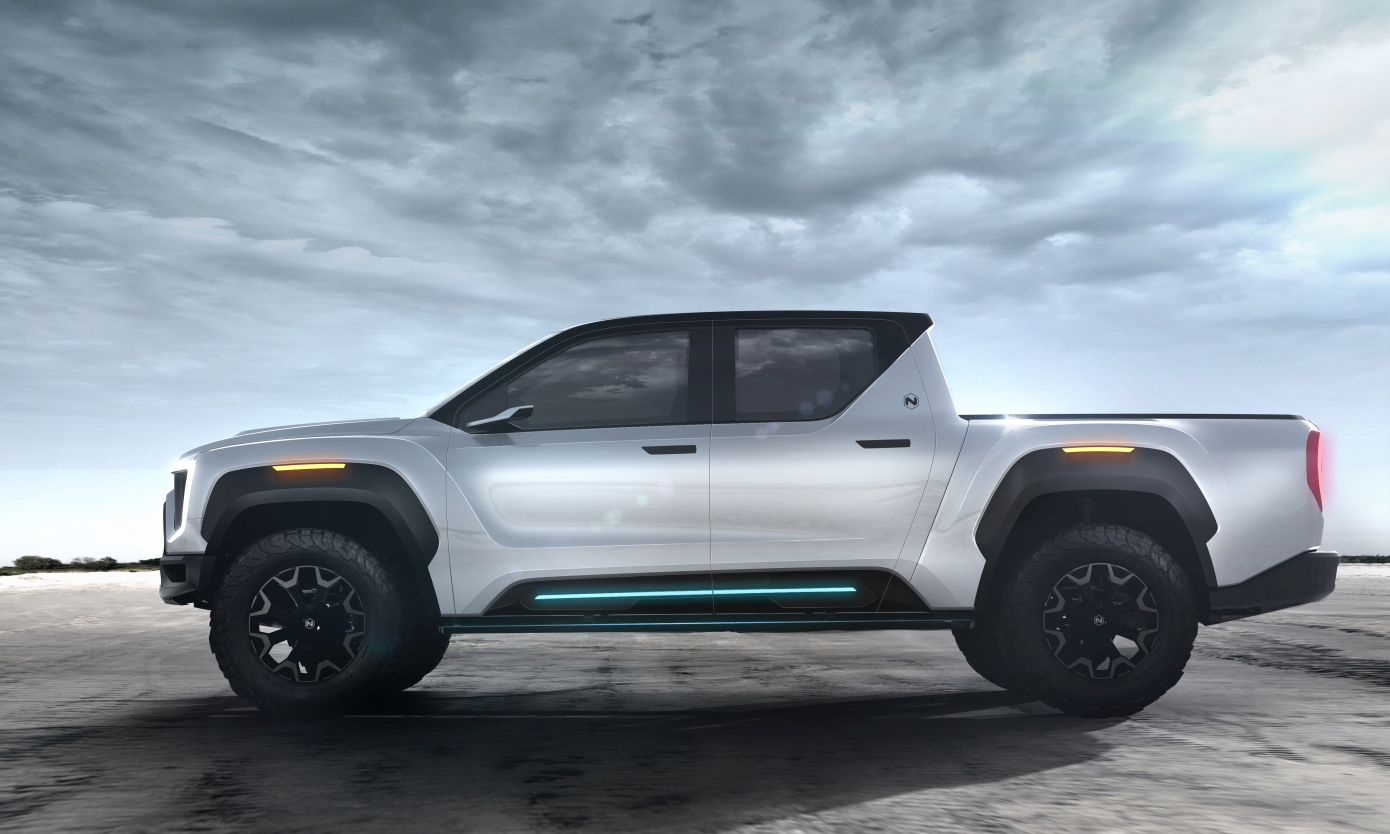 The electric truck market is heating up and Wall Street is taking notice. Last week, EV and fuel-cell truck startup Nikola merged with a publicly traded acquisition company called VectoIQ  and saw their stock prices surge 104 percent after the company announced it would begin taking orders for its first passenger vehicle offering, the Badger, on June 29th. The announcement doubled Nikola’s total valuation as it soared past both Ford and Fiat-Chrysler at the high point reached on June 10th.

The Badger is a ZEV pickup truck that will be available as either an all-electric or a hydrogen fuel cell and battery-powered hybrid. The hybrid version promises an astronomical 600-mile combined range and isn’t expected to enter production until 2021. In the meantime, Nikola is working to bring their all-electric and fuel-cell freight trucks to market. The company has already logged $14 billion in pre-orders from companies like Anheuser-Busch and Ryder Systems.

Not be outdone, Tesla CEO Elon Musk issued a memo calling for “volume production” of their heavy-duty Semi. The memo sets up a potential race between the two companies with Tesla preparing to make the first deliveries of the Semi in 2021 and Nikola working to reach full production by 2022. Several outlets are citing the memo as the key driver behind yet another windfall for Tesla shareholders when the stock price surpassed $1,000 for the first time on June 10th.

The zero-emission truck market is growing and Bloomberg New Energy Finance predicts that heavy-duty ZEV trucks will make up 10 percent of sales across the global market by 2040. While battery-electric vehicles are expected to edge out other zero emission technologies, fuel cell vehicles could find some footing in the heavy-duty truck market. The 2020 EV Outlook forecasts that fuel-cell vehicles will be more popular in this segment than in the passenger vehicle market, comprising almost four percent of sales by 2040. Nikola is counting on this growth to generate an increase in projected annual sales revenue from $150 million in 2021 to $3.2 billion by 2024.

Nikola is also counting on continued support for this technology in the key market of California. As is the case with battery-electric vehicle and charging deployment, California is well ahead of other states in its deployment of hydrogen fueling technology. The Golden State will be a critical domestic market for Nikola’s fuel-cell freight trucks and it is the only state that has provided public funding for fuel-cell trucks so far among the awards we’ve logged on EV Hub. More than $41 million was awarded through the California Climate Investments program to both Toyota and Kenworth to pilot their fuel-cell drayage trucks at the Port of Los Angeles.

California will likely pull even further ahead, as the landmark Advanced Clean Trucks rule, mandating that ZEVs make up a yet-to-be determined portion of truck sales, is expected to be approved this summer. California’s incentives for this technology will also likely lead Nikola to prioritize the state for deployment of its hydrogen refueling network. Nikola bought $30 million worth of hydrogen fuel production equipment from Norway’s Nel ASA on June 3rd just days before the merger was finalized. This purchase will support the company’s quest to develop “the largest hydrogen network in the world.” This is just the latest in a stream of more than $9 billion in global private investment publicly committed to medium- and heavy-duty ZEVS.

Government agencies and electric utilities are also answering the call to invest in the electric truck market. With the recent announcement of $130 million in grants for electric transit buses through the Low- or No-Emission (Low-No) Grant program, public funding for electric trucks and buses now exceeds $1.1 billion. Approved utility investment for programs focusing on electric trucks and buses is worth more than $737 million, almost 98 percent of which falls in California. You can track all of this through our recently updated landing page for medium- and heavy-duty electrification, which is free for all to use and is updated quarterly.