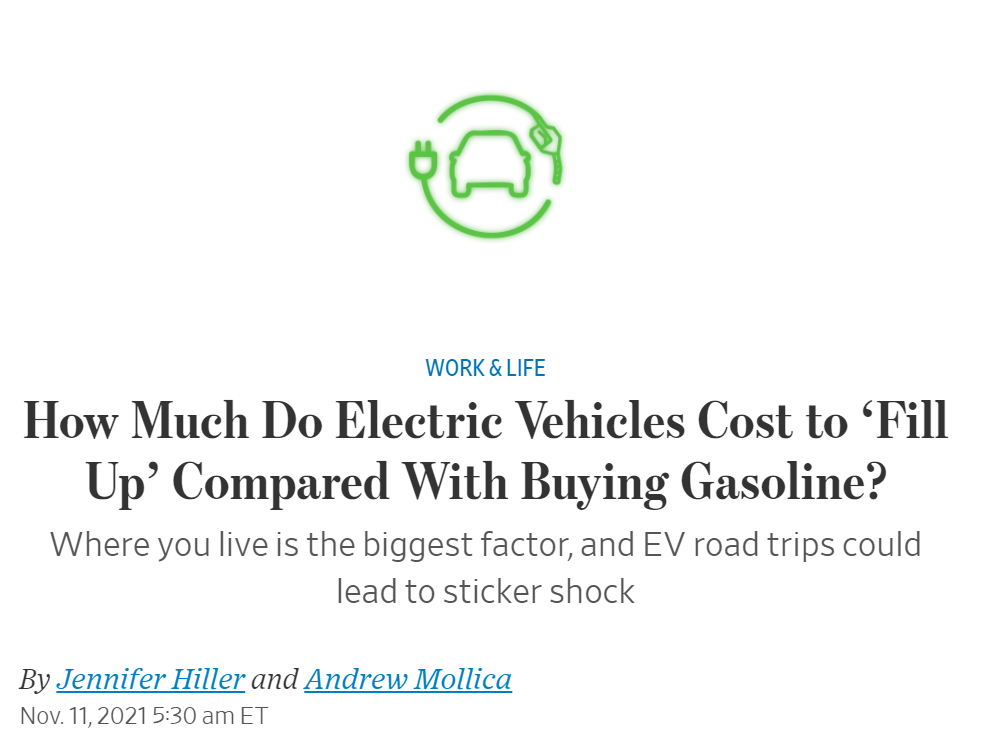 Everyone wants to talk about the cost of electric vehicles. The cost conversation most often starts with the price tag, but it is important that it doesn’t end there. New reporting from Jennifer Hiller and Andrew Mollica in the Wall Street Journal breaks down the costs of fueling an EV in 15 cities across the country. We assisted them in some of the assumptions and cost calculations. The story is a lovely click through experience but also tells a fascinating data story about the savings and costs of driving an EV.

The reporters started with two scenarios: first, getting around on a day-to-day basis, and second, a 300-mile road trip. In the former scenario, the driver relied on home charging and in the latter scenario they relied on public charging. Part of the data that we pulled for this project showed just how rare road trips really are – life doesn’t look like the cross-country adventure ads it turns out. In fact, fewer than half a percent of all trips across the country are more than 150 miles. The reporters looked at how two cars – the Mach-E and the RAV4 – would fare on different drives in various cities around the country.

There are some findings that will most certainly not be new to you but are important background for new audiences. Just as gas prices vary considerably across the United States, so too do electricity prices. Further, home charging is much cheaper than public charging. This point raises a number of broader questions about equity and access to home charging.

The reporters find that the home charging “fueling” cost savings relative to gasoline are largest in Spokane, Washington, Denver and Salt Lake City, while New York City, Detroit and Portland, Maine had the lowest annual savings. The savings differences are considerable – the savings in the top three are nearly twice that of the bottom three. The top cities for EV savings all have very expensive gas. Over 100,000 miles, the savings to EV drivers in the top three cities are all over $8,000. Even in the states that do not have as favorable cost savings, EV drivers save thousands of dollars for 100,000 miles traveled.

The cost savings of fueling an EV are not the only way that EV drivers can save money. Veloz’ CEO Josh D. Boone outlines the other potential cost savings for EVs including significant savings on vehicle maintenance. Boone cites a study by Argonne National Laboratory which finds the cost of maintenance for EVs is 40 percent cheaper than their gasoline powered counterparts.