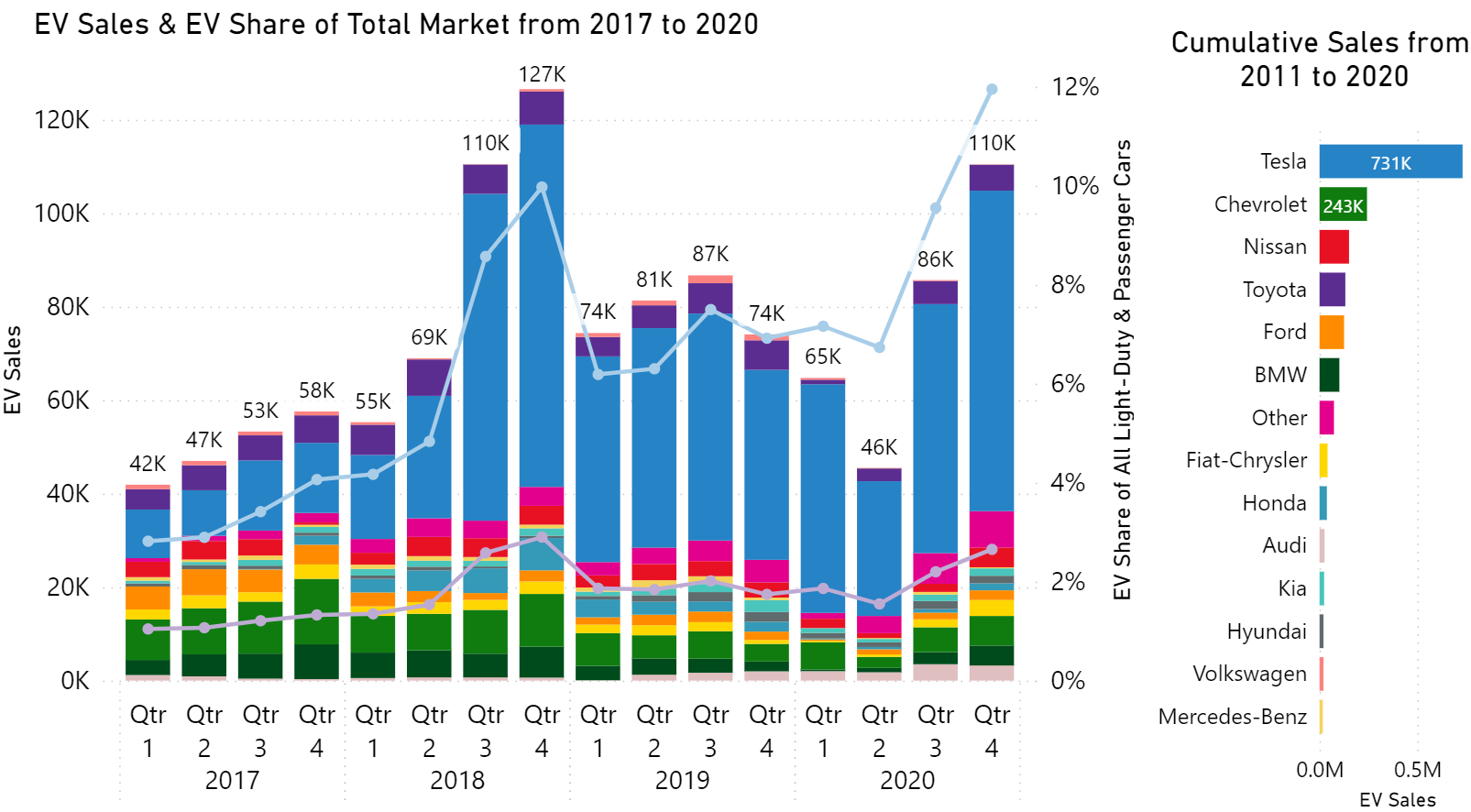 After a rough first six months, the U.S. passenger EV market rebounded and ended the year just three percent below 2019 in terms of total sales volume. The EV market, and the auto sector overall, hit its low point in May with a 54 percent drop in EV sales compared to 2019. This pandemic-induced crash in auto sales led to a 29 percent slump in the EV market through June 2020.

Since then, the market has rebounded and year-over-year EV sales were up in every month from September through December compared to 2019. November and December marked the year’s high points when U.S. EV sales surged 86 percent and 52 percent over the same months in 2019, respectively. The auto market overall was down by 15 percent for the whole year, indicating that EVs outperformed conventional vehicles in the United States in 2020. Despite a strong showing late in the year, 2020 marks the second consecutive year of declining EV sales in the United States after nearly a decade of annual growth. The U.S. EV market was down 12 percent in 2019 compared to 2018, the strongest year for U.S. passenger EV sales on record.

The slumping U.S. EV sales in recent years contrasts with considerable sales growth in Europe and elsewhere. The performance of the European EV market last year thrashed predictions early in the pandemic that the global EV market would shrink by 18 percent in 2020. Instead, EV sales grew by an astronomical 170 percent in Europe and the global market was up 39 percent according to Canalys. Roughly 1.3 million EVs were sold in Europe, accounting for 11 percent of new car sales. The 300,000 EVs sold in the United States in 2020 represent only two percent of the total light-duty vehicle sales for the year.

Without quick and decisive action, the United States risks falling further behind its main competitors as the global EV market accelerates. Last week, Congressperson Mike Thompson reintroduced the Growing Renewable Energy and Efficiency Now (GREEN) Act in the House of Representatives. The GREEN Act would extend the window for federal tax credits for automakers who have passed the 200,000 EV sales threshold. A new cap would be set at 600,000 vehicles before automakers enter a phase out period, bringing eligibility back to Tesla and GM vehicles for a period. In addition to extending the credits for automakers, the bill would add new federal tax credits for zero-emission buses and trucks. There are currently only six states that offer recurring programs offsetting the cost of procuring medium- and heavy-duty EVs.

The cost of manufacturing EVs continues to fall as battery prices decline. Between 2010 and 2020, the average price of lithium-ion batteries decreased by 89 percent, driving new investments in domestic battery production. This spike in investment activity has generated stiff competition and plenty of drama. Battery giants LG Chem and SK Innovation made headlines last week when the U.S. International Trade Commission (ITC) ruled in favor of LG Chem’s allegations that SK Innovation stole trade secrets. The order places a 10-year import ban on SK Innovation after a four-year grace period in which the company can supply batteries to Ford. A steady stream of batteries is essential to ramping up domestic EV production, and Ford is among the automakers calling for a settlement to be reached between the battery manufacturers. Volkswagen, which was granted a two-year grace period to source batteries from SK Innovation, also hopes the dispute will be settled outside of court. President Biden has 60 days to overturn the ruling, which complicates plans for the rollout of new vehicles like Ford’s F-150 and risks a loss of SK Innovation’s planned $2.6 billion battery facility that could employ 2,600 people in Georgia. You can track all EV manufacturing investment and employment commitments on the Automakers Dashboard.