Clean Trucks from Coast to Coast 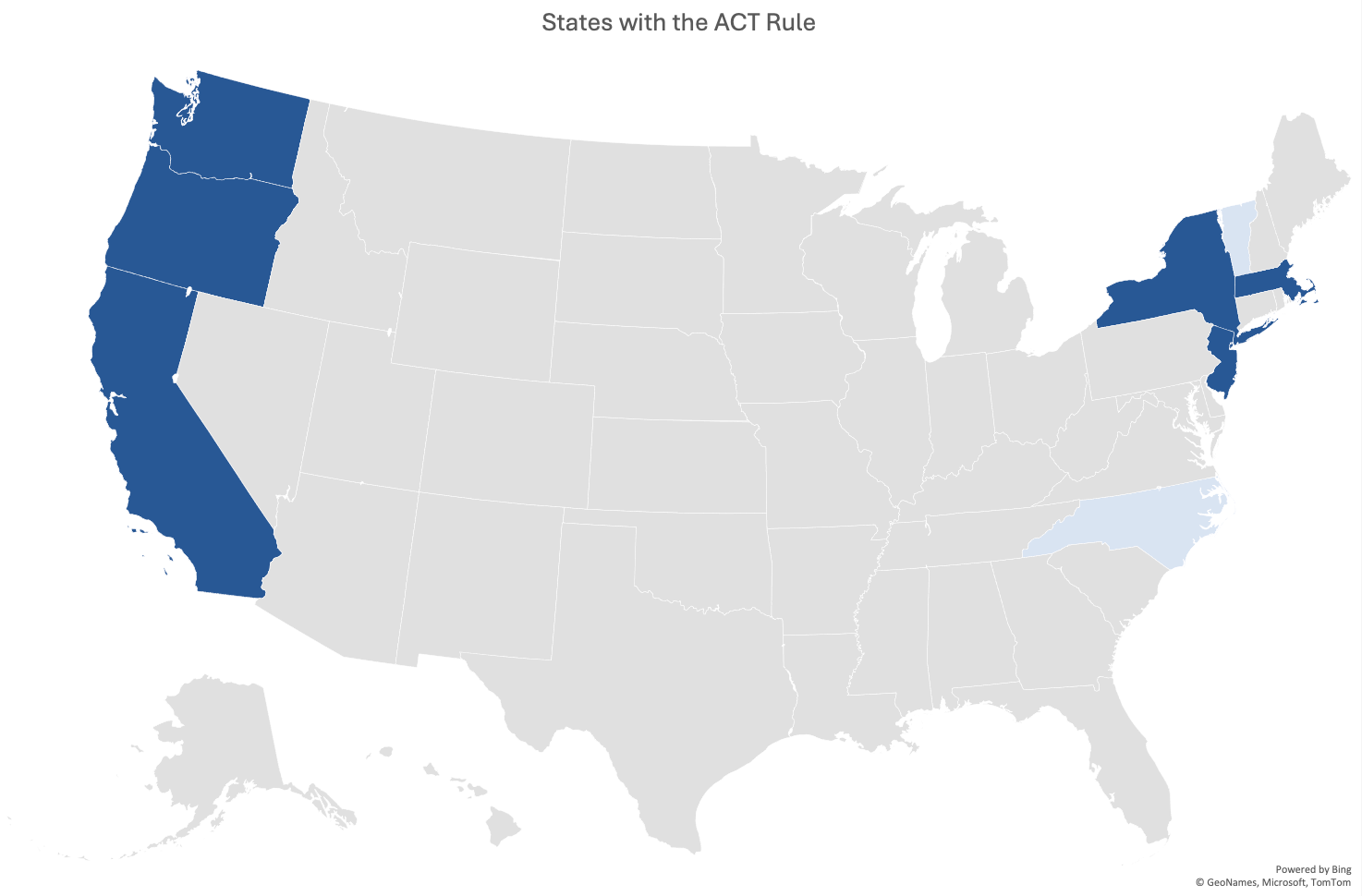 The Vermont legislature recently approved two very significant transportation electrification regulations – Advanced Clean Cars II (ACCII) and Advanced Clean Trucks (ACT). The Secretary of State now has final sign off for the regulations. This comes shortly after the news that North Carolina Governor Roy Cooper signed Executive Order 271, which initiates the ACT regulation in the state by directing the North Carolina Department of Environmental Quality to propose the regulation to the Environmental Management Commission by next May.

Vermont and North Carolina join the growing list of states pursuing ACT and ensuring cleaner trucks on the road. To recap, the ACT regulation requires automakers to sell an increasing percentage of zero-emission medium and heavy-duty vehicles beginning in 2024, or later, depending on when the rule was adopted. In a previous digest, Atlas Public Policy analyst Tom Taylor broke down how ACT works and the state of the regulation across the country. Now, a year and a bit later, we check in on how the ACT is going.

Which states have adopted ACT so far?

At our last update, only California had formally adopted ACT. Since then, seven states have adopted or are set to adopt the ACT regulation including New Jersey, New York, Oregon, Washington, Massachusetts, North Carolina, and Vermont.

On a recent EV Hub Live episode, Peg Hanna with the NJ Department of Environmental Protection explained how ACT works at a state level including the way that states allow automakers to generate credits through the sale of electric medium and heavy-duty vehicles or obtain credits through sales from other automakers. New York and Massachusetts followed suit shortly after New Jersey, adopting the ACT regulation that same month.

What about the zero-emission MDHD Memorandum of Understanding (MOU) states and ACT?

In July 2020, 15 states and Washington DC committed to 100 percent sales of electric trucks by 2050, with an interim target of 30 percent zero-emission vehicle sales by 2030.

Here is where some other MOU states stand with ACT:

Connecticut: With the passage of Senate Bill 4 earlier this year, Connecticut’s Department of Energy and Environmental Protection is authorized to move forward with California’s clean trucks regulations.

Colorado: Next month, the staff with the Colorado Air Pollution Control will request an ACT rulemaking hearing from the Air Quality Control Commission. If approved, the rulemaking hearing is expected to be held in April 2023. More information can be found from this Colorado Clean Trucks Rules fact sheet.

Maine: At the end of 2021, the Maine Department of Environmental Protection announced that adoption of ACT will be postponed for at least a year.

Maryland: Maryland’s proposed Zero-Emission Truck Act of 2022 would require the Department of Environment to adopt ACT by the end of the year. A bill was introduced but has not passed out of the original chamber.