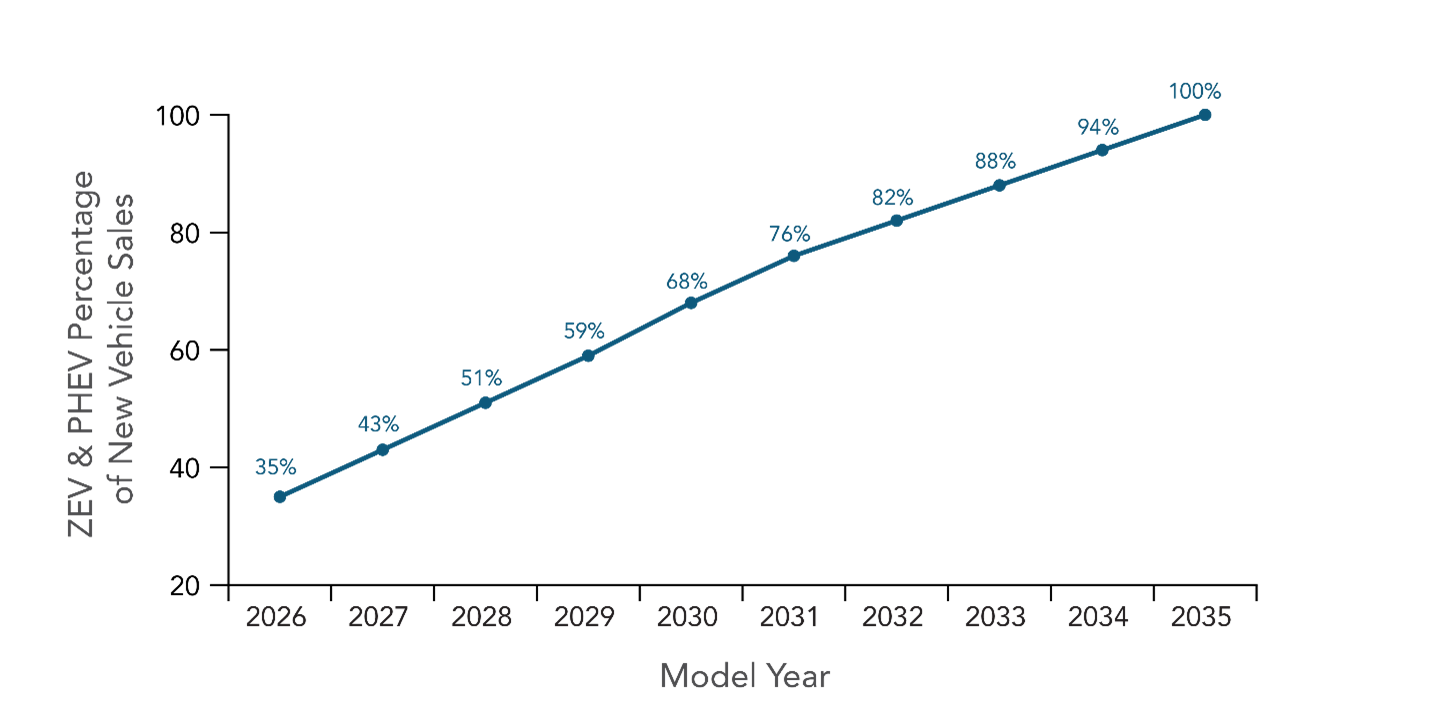 To recap, the California Air Resources Board (CARB) unanimously voted to approve the ACC II regulation on August 25th, 2022. This regulation is the state’s most aggressive push to date to drastically scale down light duty passenger, car, truck, and SUV emissions, banning the sale of new gasoline-fueled vehicles by 2035 (used gasoline vehicles may still be sold). For context, the Zero-Emission Vehicle (ZEV) program in ACC II requires automakers in California to increase the proportion of ZEV sales year by year. We’ve previously laid out the way these rules work in a digest here.

The updated ZEV regulations contain new annual ZEV sales percentages, starting at 35 percent for model year 2026 and 100 percent by model year 2035. The ZEV Program will require all new vehicles sold in California after 2035 to be ZEVs, including plug-in electric vehicles (PHEVs), battery electric vehicles (BEVs), and fuel cell electric vehicles (FCEVs.) Up to 20 percent of ZEV credits may be generated by selling long-range plug-in hybrid electric vehicles (minimum of 50 miles range by 2030), which are classified as zero emissions by the regulation but will still use gasoline on longer trips or if infrequently charged.

Under Section 177 of the Clean Air Act, other states may choose to adopt California’s Advanced Clean Cars standards in lieu of federal standards. Fifteen other states have adopted the ZEV program for model years up to 2025. As it currently stands, some states have officially announced plans to adopt this new regulation while others haven’t publicly signified a course of action. Here is what we know so far:

California’s neighbors to the north, Oregon and Washington, are rounding out their rulemakings and are expected to finalize the new regulation by the end of this year. Oregon is currently hosting public input sessions to inform its rulemaking for dates set in October. In addition to New York’s recent announcement, Vermont has announced plans to adopt this regulation in the coming months.

Virginia, Massachusetts, Connecticut, and Washington all have trigger laws in place that bind them to adopt CARB’s regulations. Governor Youngkin of Virginia has announced plans to reverse this law, which was enacted by his predecessor.