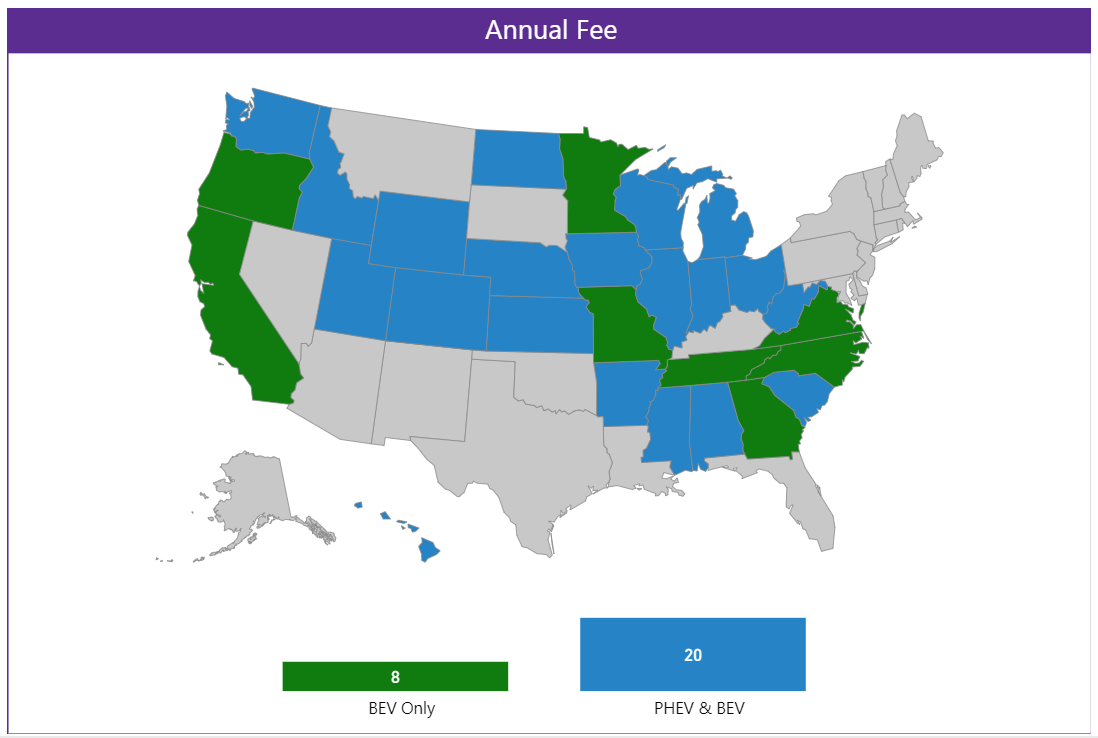 States across the country are using EVs as scapegoats for declining revenue for transportation infrastructure, according to a new report from Consumer Reports. The findings agree with our earlier observations from March and May on several bills being considered in state legislatures: EV drivers are often paying disproportionate fees compared to drivers of equivalent gasoline vehicles. In total, 28 states have now implemented some form of additional registration fee for EVs. Consumer Reports found that existing and proposed fees in 26 states would require EV drivers to pay up to three times the amount that owners of new gasoline-powered vehicles pay in annual gas taxes for a new car in 2025.

In 2018, EV sales accounted for just over two percent of the national auto market with just over 360,000 vehicles sold. In their Annual Energy Outlook for 2019, the U.S. Energy Information Administration estimated EV sales of 1,276,000 by 2025. Even under the more aggressive assumption of 11 percent EV market share, Consumer Reports estimated the relatively small number of EVs on the road in 2025 would only generate 0.3 percent of total state highway funding. Based on these findings, it appears that annual fees, even when higher than gas tax revenue from an equivalent internal combustion vehicle, will not address the issue of highway budget shortfalls.

Eleven states including Illinois, Kansas, Hawaii, Iowa, Utah, Wyoming, Alabama, Arkansas, Ohio, North Dakota, and Washington have passed legislation establishing new fees or increasing existing ones in 2019. Eleven states have implemented or are considering annual registration fees of $200 or more. This list includes states like Wyoming, Alabama, Arkansas, and West Virginia, each of which rank in the bottom ten in terms of EV deployment per person among all states. All these states are among those with the most punitive fees according to the Consumer Reports study. High EV fees are also being considered in stronger EV markets. Earlier this year, lawmakers in Illinois, which ranks ninth out of all states in terms of total EV sales, proposed an EV fee of $1,000.

The general argument has been that EVs are not paying their fair share since they do not pay gasoline taxes. The fees being imposed in some cases, however, are significantly higher than what is paid by an equivalent gasoline vehicle. As we said in March, a Toyota Prius driver in Georgia traveling 10,000 miles per year would only pay $75 in gas taxes compared to the $214 registration fees paid by EV drivers. These fees are punitive, especially considering EV drivers already contribute to state infrastructure revenue through general fund appropriations, tolls, property taxes, and other measures tracked in the Road Network Funding Dashboard.

The list of states with highly fees is likely to increase with seven states considering new fees that would be more than two times as high as the average amount drivers of conventional vehicles would pay in annual gas taxes. Punitive EV fees could influence consumer decisions and slow down efforts by automakers and policymakers in many states to accelerate local EV markets. In the EV stronghold of California, researchers found that an annual EV fee of $100 could lead to a 20 percent decline in EV sales in the short term. This comes at a time when states’ ability to regulate tailpipe emissions at the state and local levels is being challenged by the federal government. We’ll continue to monitor state legislation in this area and mapping EV fee developments across the country. Let us know if there are any bills we are missing from our State Legislation Tracker.